What goes up must come down. And after our guide R put the kabosh on my secret plan to snail my way ever so slowly up the glacier to the top, timing be damned, the down is what faced us. We started off at a good clip. Ever since my way too long climb down Mt. Elbrus in 2014, I’ve focused on descents, with some modicum of success. R put me at the front of the rope on the way down the canalone – it’s certainly the safest place to be, but it’s also the spot where you get to pick out the route and match all the mixed up steps in front of you to create some semblance of a path down. I could tell I hadn’t acclimatized well because as I descended I felt more and more energetic – and we moved much better as a team than we had at any point on the way up.

We finally made our way back to the scree field, and R went on ahead of us. J and I managed to pick our on way down, albeit with some wrong turns that increased the difficulty of the route. At one point we found ourselves on an 18 inch ledge with a sheer drop on one side. I’m sure that is not exactly the trail we were supposed to be taking. But at least the 18 inch ledge didn’t coincide with the increasingly high wind gusts. Two separate times I was literally knocked off my feet. There was a steady 30 plus mile an hour wind with gusts blowing harder. I didn’t slip – I was simply slapped down. 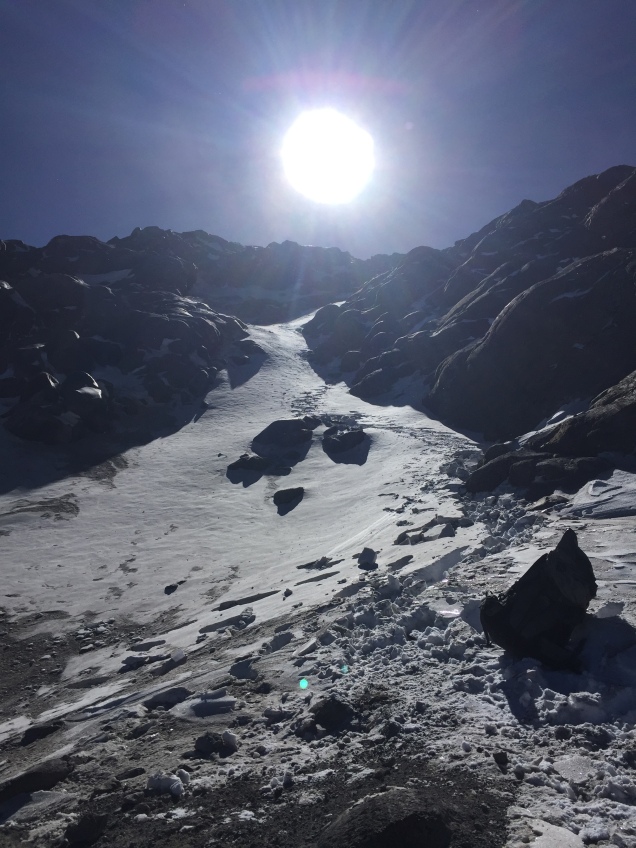 Finally we made it back to the strange stone aqueduct that led to the hut. Apparently at one point there had been a grandiose plan to work with water and drainage on Orizaba, leading to the construction of a now defunct aqueduct feature that forms the first part of the trail up the mountain.

And, how, you may wonder, were the other teams doing? Well, as mentioned, the Italian hadn’t even made it to the glacier before altitude overcame him. When we left the edge of the glacier, we could see three teams of two each inching their way up its stark white. They were no more than little black doodles on a white sheet of paper. It was hard to tell who was who, and it wasn’t until we were back at the hut and the two Russian teams showed back up without reaching the summit that we realized the top most team battling the high high winds was our own teammate G and our guide D!

I wanted to wait to greet them when they returned, hopefully after a successful summit, but after we’d packed up and they still weren’t down, it was clear it was going to be a lot longer. We’d already been climbing for about 8 or 9 hours, and the green of the forest below was starting to seem inviting.

And this is where the people part of the trip became bizarre enough to rival the uniqueness of our natural surroundings. We’d heard rumors that the Russian team included a high ranking politician and others – but how high ranking we didn’t realize until R arranged for us to hitch a ride down the mountain to the village in their two jeeps while he waited for G and D.  There was one free spot in each van. J went with the politician and his fiancée; she hadn’t climbed but still looked pretty wind blown.  When we say high ranking, we are talking cabinet level. I know; I figured out names and Googled everyone. Google images helped confirm I’d locate the right bios. Who expects to spend a night sleeping in the freezing cold on wooden platforms in a hut in remotest Mexico with government officials from Russia.

My jeep mates were equally illustrious in Russian political and academic ranks.  Perhaps even more so for a would be mountaineer, as one of them had been a professional climber who had summited Everest in 1992 (where he and Scott Fisher of Mountain Madness fame had argued about placement of fixed ropes) and climbed K2 in 1996. He was also a snow leopard – meaning he had summited all of the highest peaks in Russia, no mean feat. (I found that last bit out through Google.) Anyway, we had a fascinating conversation on the way down, and it certainly added an international flair to the trip.

Back at the hostel, we read and had a very late lunch. Eventually G and D showed up, with the glow of the summit still surrounding them and only a few bruises and battle scars to show. They had battled unbelievably high winds, and even though they couldn’t even stand upright on the summit, had the glory of being the only two climbers to make it to the the top that day. I just kept hoping a little of that karma would wear off on me.

We had one more night in the hostel. A whirlwind of Mexico City  comes next.

6 thoughts on “Pico de Orizaba, Mexico – After the Glacier”