The swamp was especially wet this week as a very beautiful morning morphed into a grey day of drizzle, thanks to El Niño. Yes, this post is a detour from adventures in Mexico, the conclusion of which will be forthcoming. A few twists are always needed here and there.

Orlando’s Dinky Line Urban Trail is part of my running routine. But I’d always wondered about the part of the trail that on the map consisted mostly of orange dots, which is apparently code for sidewalk as opposed to trail. In any event, the cool weather proved tempting and instead of a run followed by Bikram, husband J and I found ourselves on what turned out to be an 11 mile loop to and around Orlando’s in-the-process-of-being-renovated and turned into something else entirely Fashion Square Mall.

We started off accompanied by one of Lake Ivanhoe’s many resident and, to me, unidentifiable water birds. He looked a lot more enthusiastic about the drizzle than we were.  Shortly after, still on the part of the trail I knew, we passed what I am convinced is a haunted radio station. It’s been empty since we’ve lived here, yet it’s right next to a popular hotel. Just one of those urban ruins. A few other urban ruins in our journey – an abandoned sushi restaurant and a bank that looked as though it had never recovered from a heist. 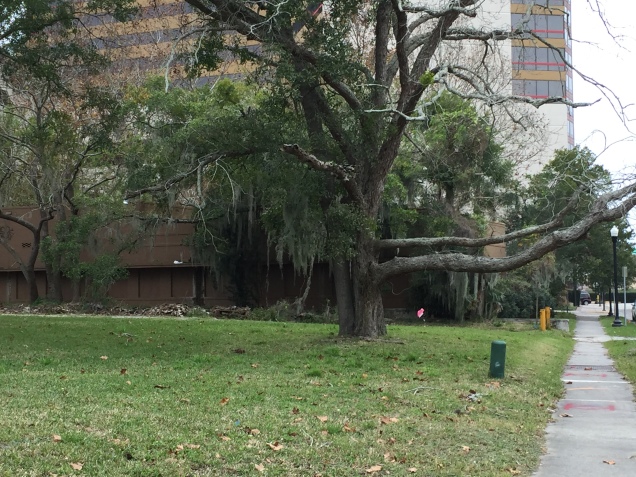 Finally we reach d the orange dot part of the trail and we were off! First up was a tour of in-fill development in an area called Colonialtown.  Small townhouses and fourplexes, built in the style of the original small houses.  Surprisingly attractive, even in the rain that started to fall more heavily.

To my surprise, we then discovered that what I had always thought was the beginning of the Cady Way Trail wasn’t. The trail head is actually located at Lake Druid Park – a lake and a park I’d never heard of despite 25 plus years in Orlando. Shortly after, we finally reached the mall and it was time for a lunch break at Noodle Co. – a first for us. At least it rained hardest while we were inside.

The Executive Airport is across the street from the mall, and after some difficulty with urban route finding, we got ourselves back on the orange dots. Next to the airport is a party supply store selling themed party goods for any type of celebration you could imagine. Who knew there were so many types of princess tiaras. Not to mention sizes and shapes of plastic trays or colors of napkins. And there was even a room filled with nothing but janitorial supplies.

A little bit of FaceTime with daughter S entertained us for the next mile or so. Nothing like getting to watch a New Orleans Mardi Gras parade in real time. That was followed up by the Orlando Chili Cook Off – if we’d known we wouldn’t have had lunch!

After passing the landmark Colonial Lanes Bowling alley – what could be better than cocktails and bowling – we finally made our way back toward downtown and along what I can only describe as Memory Lane. There was the girls’ daycare center. And the orthodontist’s office, where I spent many an hour in the waiting room.

Mile 11 of our loop brought us back to Lake Ivanhoe. We bookended our hike with another bird – a serious grey heron who looked as though he might charge us admission for passage around the lake.

There was no snow, no ice, and no altitude. But there were a lot of things and places I’d never noticed before in the few miles right around my house – and that’s an exploration in itself.