People keep asking me, “What’s the next one?” The reality is that we are in a between year. Trying not to make it sound like the doldrums (what a great word), but when I looked at my schedule for next year, I simply can’t find a spot for a two week trip plus weekends on either side. I am usually able to preserve that period of respite but this year’s judicial system apparently had other ideas in mind. Hmm.

We haven’t had a between year for a while. In fact, I think since 2013 which somewhat inadvertently turned into one due to a virulent flu attack on J as we were about to embark on our Hawaii backpacking trip. Since then, we’ve climbed Elbrus, Ecuador’s volcanoes, hiked the Scottish Highlands and the Peaks of the Balkans, and summited Stok Kangri at all of its over 20,000 foot splendor.

So what will 2020 hold? The year itself – with its parallel numbers – must mean something. Thus far, the idea is a throwback – a week at the North Carolina beach with family and friends. Haven’t done that for years. And hopefully the daughters are now old enough to avoid sea kayaking accidents like the one many years ago that caused me to call 911 to everyone’s great embarrassment since they’d hauled themselves out of the ocean by the time the rescue team arrived. I suspect we are still black listed at the sea kayak rental place.

But as fun as that will be, there have to be some actual summits somewhere. It looks like work will take me to Seattle over spring break – and there appear to be some nearby hikes with a good 3500-4000 feet of elevation gain. And N, A’s boyfriend, has suggested we hike the northern part of the Appalachian Trail and summit Mt. Katahdin. It’s the highest mountain in Maine and he promises he knows the way to reach its 5,267 foot peak.

That sounds appealing. Given that the odds of our hiking the entire AT are probably close to nil we might as well cross the finish line first.

So, I may wrap the decade of my 50s with local summits. They are just as important as the others. But 2021 marks the 10th anniversary of the start of all my mountaineering and related adventures. Entertaining suggestions for another non (or at least mostly non) technical, over 20,000 foot mountain for my 60th birthday next year! Got to keep looking toward the future! 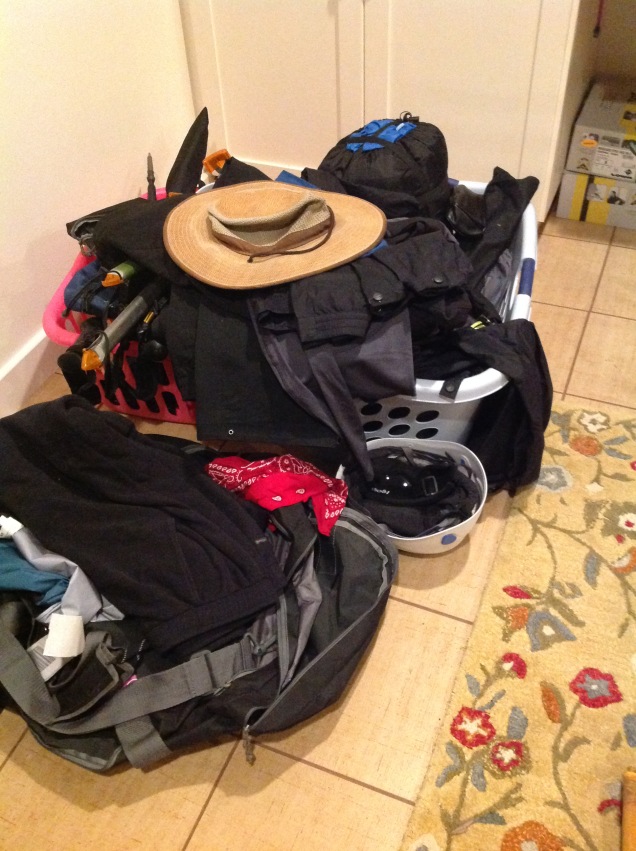 All of us have those Purchases that seemed very logical to buy at the time. And perhaps they were, but life happens and the intended event for which said Purchase would have been just perfect never occurs. And now the Purchases sit there in a closet or a duffel or a garage as homage to lost hopes and dreams.

Granted, a bit melodramatic. But my climbing/hiking storage space is full of such items.

The rope. We carefully ordered on line the exact specifications identified in the gear list for our July 2015 trip to Ecuador. Our local hiking/climbing store didn’t carry the precise dimensions and we were sure those few millimeters would make the difference between success and failure. Alas, it turned out the rope wasn’t going to be necessary unless we actually climbed Chimborazo, and once there, we made the wiser choice of allowing our summit of Cotopaxi to be our crowning glory.  Shifting Winds Lead to Cotopaxi Summit.  The rope lies curled in waiting. One day.

The stove. This was to accompany us on our multi day backpacking trip along the Muliwai trail in the Big Island in Hawaii In 2013. Those plans were kaboshed when J came down with the flu and was told by the doctor he’d have to be helicoptered out if he tried it. I did the first couple of hours in my own, but there was hardly a need for a stove. Ah well, the alternative we found – the Mauna Kea hike – was pretty spectacular. Journey to Another Planet – Mauna Kea

The tent.  See The Stove.

Odd square pieces of aluminum foil, carefully folded. I think they relate to the stove. Highly unclear what they were for or why I saved them.

Long and skinny gaiters. These were on sale at some point and were apparently so cheap because no one else could figure out what they were for either. They haven’t really gone to waste because I used them to wrap my crampons in. Actually that didn’t work very well and they too are now relegated to the pile of great unuse.

Those are just the gear items that come to mind. I’m only now putting everything away from our January Orizaba trip, in preparation for getting a lot of it out again for our Scottish Highlands hike, which starts 60 days from today.

There’s still room to realize all the dreams of the unused gear.

Mauna Kea isn’t particularly well-known as a destination hike. Most people get to the top by car. But after my husband became the only person in Hawaii to come down with a severe case of flu in the middle of August 2013, thus putting the kabosh on our plan to backpack the Muliwai trail (more on that later), Mauna Kea seemed an attractive alternative.

Due to the unexpected change in plans we had several wild card nights – no reservations, no nothing. Two nights before we climbed Mauna Kea we stayed at a 1970s hotel on the edge of Kona, complete with kitchenette and ancient dinette table. Ocean front was an understatement as the second floor unit we were in was bombarded with large waves throughout the night – unclear what the decibel level was. The next night we returned to the semi rundown estate of the Rockefellers outside of Waimea, now converted to a somewhat quirky bed and breakfast – without the breakfast.

The next day we awoke early to an hour or so drive along Hawaii’s oh so well maintained road to Mauna Kea. We parked at the ranger station at approximately 9200 feet elevation about 7 am and signed in. Little did we know that only two other hikers would sign in that entire day.

After the first bit of the hike – some fields, some green – we might as well have been hiking on Mars, or at least my idea of Mars. Black and red lava rocks, occasional prehistoric (maybe) cairns of rocks, and very little that resembled vegetation. The temperature varied between extremely hot and downright chilly during the few moments when the sun went behind the clouds.

One of the more peculiar features was that even though the road up would occasionally pop into view I felt more isolated on Mauna Kea than anywhere on Kilimanjaro, much less Mt Elbrus. The trail wasn’t always well marked and it was not hard to imagine being found years later after suffering an unhappy death from dehydration.

Making the trip even more interesting was the rapid elevation gain – literally sea level to almost 14,000 (13,796) feet – in about six hours. I usually don’t feel anything at 14,000 feet but I definitely started to have a headache near the top, combined with some dehydration.

As you approach the top, all of a sudden you start to see the telescopes. Peering up over the orange landscape and the gradual volcanic cones, it is as though you have inadvertently wandered off course and ended up on Another Planet. There’s also a set of porta-potties, a nice reminder of earth, however. I kept thinking of the novel Cloud Atlas – one part of which involves an adventure at the top of Mauna Kea by the observatories – “you’re crazy. There ain’t nothing on Mauna Kea but Old Georgie and his temples hid in ‘closure walls. He’ll not let you in unless you’re ‘ready died an’ your soul is his.”

There we encountered the only two other hikers we saw the entire day. But the last mile or so up requires walking along the side of the road, with cars whipping past you. Resentment toward the motorists kicks in – they hardly deserved the summit! The summit itself involves a trek down one indentation and then up to the peak – flat on top – with various offerings to the Hawaian volcanic gods placed on a small stone altar. The wind is much more intense and as we had no idea how long it would take to go down we didn’t stay long.

It turned out our fears were unfounded. While we hiked to the summit in under 5 hours we got down in just over two – scree skiing most of the way. The sun went in and we had a good 45 minutes of walking through clouds – very refreshing after the blazing sun of earlier.

Once at the ranger station, we were met by bus loads of tourists there for night sky observation tours. While it wasn’t exactly a return to a space station, our seven hours of hiking felt like light years.