It was the best of times; it was the worst…well, you know how that goes. While my hiking has been curtailed somewhat over the last couple of weeks due to an over energetic reach at the bouldering gym that resulted in an unfortunate and ungraceful fall, the prior two weeks offered hikes into two of Florida’s most opposite landscapes – some of the few remaining miles of undeveloped beach and a stretch of rural clay roads forming a loop amid Florida’s few hills.

Some of you may remember that shortly before the pandemic started a year ago J and I trekked into the back country of Cape Canaveral National Seashore, improbably named the Klondike. Castaway on Cape Cavaveral National Seashore – Florida Hiking. Then we started from Playalinda Beach, at the south end and hiked north six of the twelve miles of completely undeveloped beach. This time, along with fellow hikers M and S, we started from Apollo Beach on the north side and headed south for six miles, hoping that this means we’ve actually done the whole thing. There may be a gap here or there but it’s close enough, IMO.

To no one’s surprise the north end of this narrow strip of sand wedged between the brackish calm of the Intercoastal and the crashing waves of the mighty Atlantic is remarkably like the south end. Mile upon mile of sand that varies between soft and rock hard, flocks of pelicans, and masses of jellyfish.

There were apparently only two other people with backcountry permits that day but we never encountered them. At some point midway in the hike, however, we could see the silhouette, far in the distance, of a figure holding something scythe shaped and standing atop a dune. It was so isolated that all I could think of was that he was either a yogi communing with nature or else a serial killer who lived in the rough underbrush waiting for victims. It’s easy to let your mind wander on beaches like that and S’s fondness for horror movies doesn’t help. I started to wonder whether the scythe shaped thing could be some sort of garrote.

As we got closer, however, we realized he was a park ranger who had clearly been assigned the task of keeping an eye out to make sure that no overly adventurous hiker was going to be cut off by high tide. And the garrote was the strap to his binoculars.

It was truly a long and arduous 12 miles, especially lugging 30 pounds in my pack. But what really made it worse was that I apparently had forgotten all the lessons I learned on Mt. Elbrus in 2014 (Steps on the Summit) and failed to put sunscreen on my lips. For about two weeks afterwards I looked like I had some horrible communicable disease and was very glad I got to wear a mask.

Anyway, not to be put off by mild injury, and feeling the Long’s Peak adventure ever approaching, the next Saturday I convinced J to go with me to hike the 10 Mile Clay Loop in Clermont. (See The Florida Foothills- 10 Mile Clay Loop). Begrudging is the best way I can describe his agreement.

When I’m out in the Florida rolling plains, I personally find it easy to imagine I’m in Tuscany, surrounded by large vistas of fields, gentle hills, and a dramatic grey sky. The fact I’ve never been to Tuscany may assist in this creative exercise. J, however, saw lots of traffic, trucks that seemed to take pleasure in speeding and kicking up large clay dust clouds in our faces, and something that looks like a large sand pit that is being constructed on one part of the loop. The for sale signs for some promised future development are a little ominous also.

It turned it was pick your own strawberries day at the very large berry farm that occupies much of the interior of the loop; hence the traffic. They’d run out of fruit though and instead people were picking sunflowers from acres of brilliant yellow flowers. The last hilly stretch with the lake on one side was as beautiful as always.

You can focus on the worst – the sunburn, the drudgery of trudging through sand and dust, and the blisters. But the best is out there too – the crashing waves, so loud you can hardly hear, the sunflowers and wildflowers and pelicans. It’s sort of like jellyfish – their stings don’t out shadow their luminous, stained glass like glow.

Foothills is a misnomer- it implies a lead up to something large and here in Florida that’s apparently only a 375 foot mountain called Sugarloaf. But the Ten Mike Clay Loop has an outsized reputation around here – it’s rumored to be the site of many a professional athlete’s training regimen and numerous folks have mentioned it to J and me as a good candidate in our never ending quest to find some topography in Central Florida.

So now that my weekends are slightly freer than they were in the midst of my trilogy of trials and arbitration, last Saturday we ventured out to try the famed loop. Of course, everything we had read urged an early start but for us that translated into arriving at the small parking area just before noon, when the thermometer was just topping 89 degrees.

Due to the eccentricities of google maps we actually ended up driving most of the loop before we finally located the small parking area, just off of Hwy 27. At that time of day, there was only one other car parked and in fact, on the whole trail we only saw one or two very hot looking runners. We didn’t see any other backpackers. 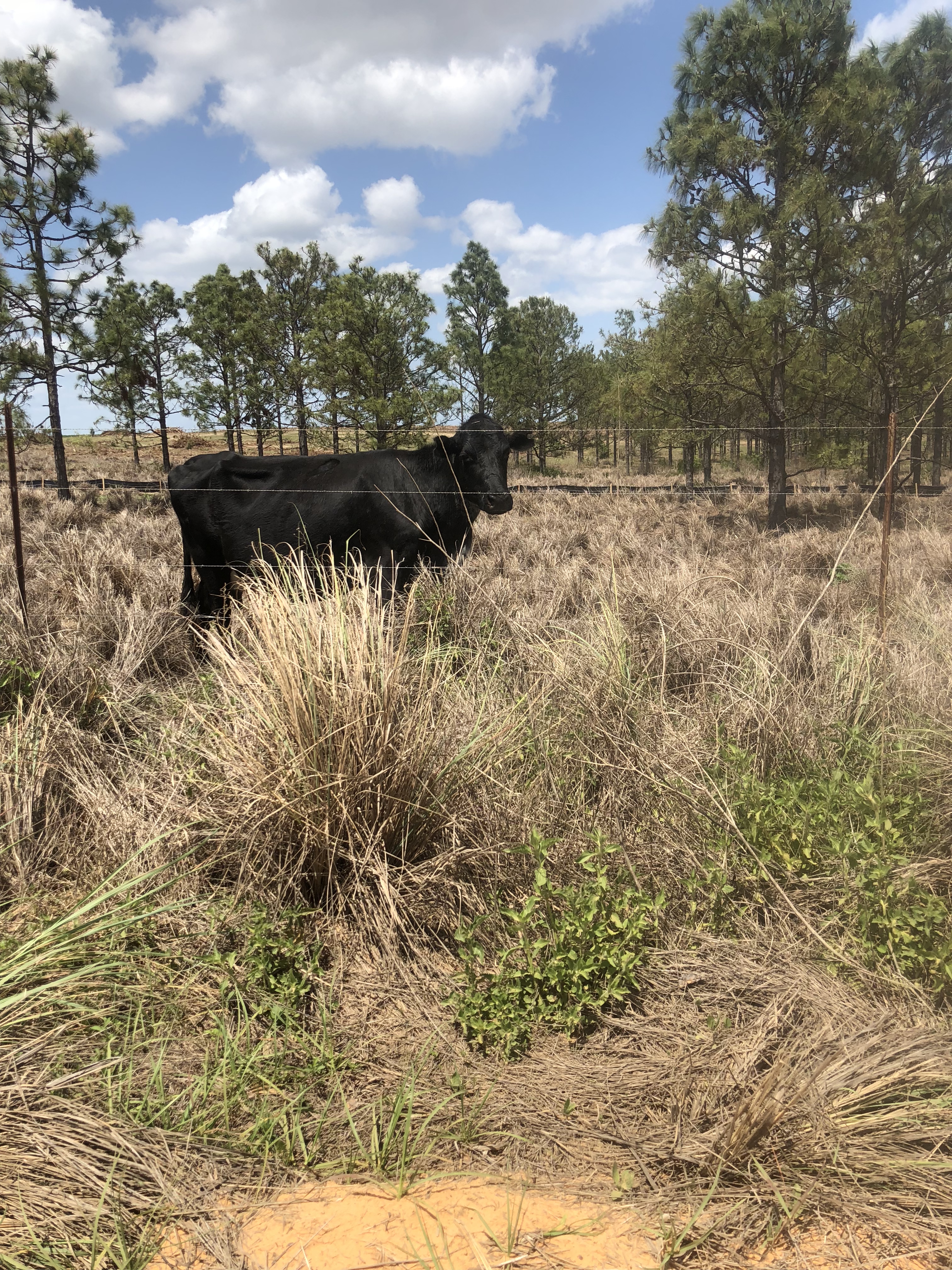 The clay roads start off with some gradual uphill through cattle grazing land. If you try hard, you can imagine you’re in some spot more exotic than Central Florida.

But at the same time, there’s a tremendous amount of what appear to be very industrial water reclamation or drainage structures. My favorite was at the top of a small hill – large metal pipes and structures by a hollowed out pond of some type and a sign indicating it’s a recharge area for the Florida Aquifer. I guess it was a large scale version of a rain barrel.

You hike first along Five Mile Road. There are a moderate number of cars but they are relatively well behaved. We enjoyed the high school,students who kept stopping in the middle of the road to take photos on top of their car. Eventually you walk past a never ending tree nursery. If you ever wondered where maples, cedars, and the like some from in Central Florida, we found the spot.

Most of the land to the side of the road is cordoned off with barbed wire, but thankfully, there’s an old, unmaintained orange grove without such barriers close to mile 5. I say thankfully because although we had plenty of water we’d brought absolutely no food. Who would have thought a purloined orange could taste so good.

At mile 5, just as you leave Five Mile Road to turn onto SchofieldnRoad I decided to switch into my Grade B2 mountaineering boots, bought specially for the Stock Kangri climb. It seemed a bad idea to me to wear them for the first time on summit day. My costume change was just in time for the hardest and hottest part of the hike. It turns out the steepest hills (and some are quite steep) are during the last three miles. Plus, a lot of it is through soft sand, adding an extra challenge. The other part of the experience is that you can’t tell whether you’ve hiked the final hill or not.  There always seemed to be bigger one just over the horizon. Good training for the “fake summit” experience you find on a mountain, just when you think you’ve reached the top.

So, once again we Florida hikers try to morph sand into snow, hot temperatures into below freezing ones, and the rolling hills of what was probably an ancient seabed into mountains formed from earthquakes and volcanos. It’s worked before and I hope it will work again. We leave two months from tomorrow for Stok Kangri.