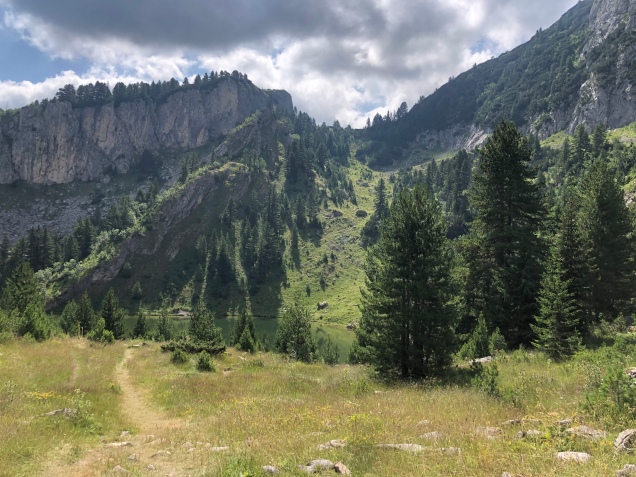 My travel journal starts off: I am sitting in the warm sunshine on a picnic bench at the Guesthouse Lepushe, in Albania, surrounded by the Accursed Mountains. Several of our group are playing cards, and another is sharing wine made by the nuns at the monastery we visited the previous day – straight from the plastic screw top bottle – with a pasted on label over the original brand. I’m in one of the most beautiful places I’ve ever been.

Two days ago our first full day of trekking began with a classic Kosovo breakfast on the porch -tomatoes, egg, puffy fried bread, cheese and olives. Somehow all the trekkers at the home stay each got a turn at the one bathroom before setting off. Lunch food was set out so everyone could make their own sandwiches for what was billed as the most difficult of the trekking days. 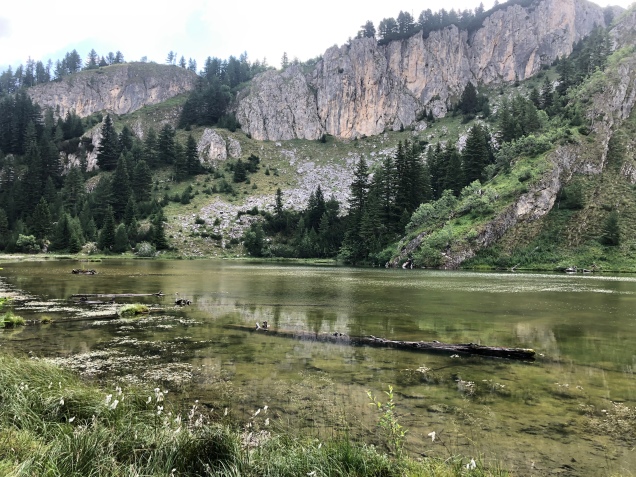 We took jeeps to the start of the trail, which started with a straight up trajectory. They don’t believe in switchbacks here. We later learned that a lot of the trails were old smugglers’ paths. We hiked through long-grassed meadows where the wildflowers became even more exotic – now shocking blue periwinkles interrupted the yellows, pinks, and purples. Our first stop was a glacial lake – not blue but green glass. A second glacial lake came soon after, this one very low and banded by rock. 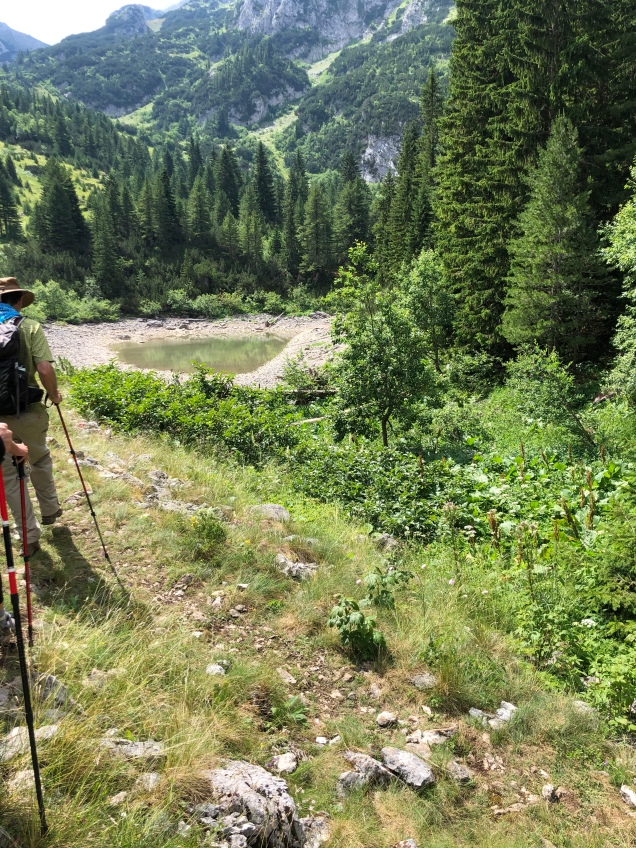 We continued onward and upward, finally reaching the Jalanek Pass, with limestone cliffs all about. Walking along the border of Kosovo and Montenegro, ultimately we started to follow the “signs” down, bringing us into Montenegro. It was a very long descent with some rocky spots – we had gained a lot of elevation. 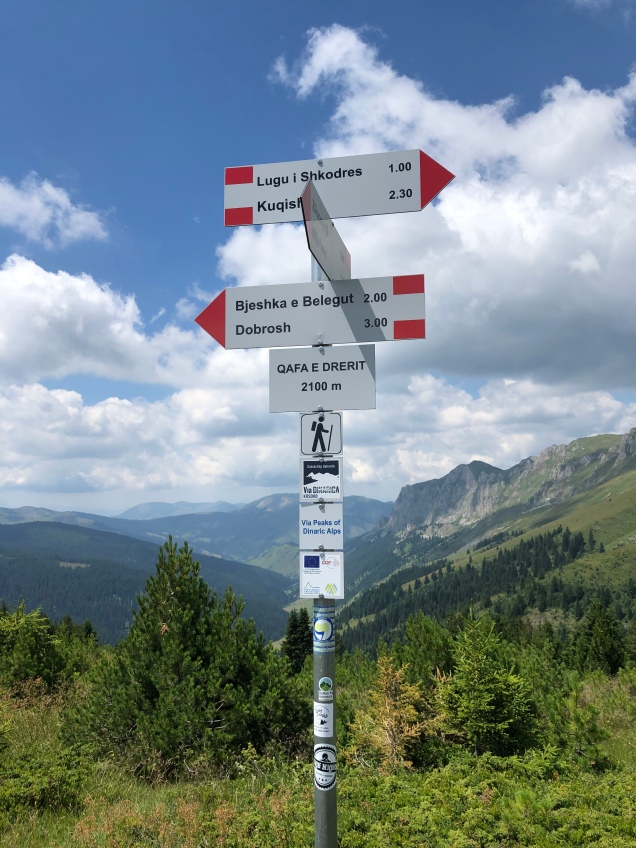 After 7 hours or so, we could finally see the vans that were to deliver us to that night’s accommodationway below us across some meadows. However, it turned out those fields were the property of an ancient farmer who staggered over to us with a walking stick in each hand while we had stopped for a very brief rest. He was seemingly unable to speak in words but eventually pulled out a piece of paper that made clear he expected tribute for crossing. Our guide quickly rallied us all and we ascended back up the meadows and found a way down through some fields being harvested by a much more congenial farmer who apologized for the behavior of his neighbor.

The next controversy involved deep unhappiness among the drivers of the three vans – too many had been ordered and our guide had had no cell service so he couldn’t let anyone know. Eventually, after a flurry of extremely loud communication – with great umbrage and angst on all sides – we ended up with all three vans, although J was the only passenger in one of them.

Following our 7-8 hour trek, we had an hour or so drive to some cottages in a national park where we were staying the night. We drove through several small towns, a number with Florida style McMansions planted right next to traditional small concrete dwellings. Nothing is really “quaint” here – the utilitarian architecture of post WW2 USSR left a strong mark. According to our guide, Montenegro is now a good place to house money, and Montenegrans who reside in the west frequently maintain large residences in the Montenegran countryside.

By then, somehow we had assuaged the van drivers and we all loaded into two vans for the final stretch. There were 4 of us in a three person row in the smaller van. The steep uphill on the way to the national park simply proved too much for its engine, and despite several valient attempts (I kept thinking of the little engine that could), it kept stalling half way up the mountain. Eventually four of us got out and finished the day the way we started – trekking up the last hill.

The cottages that night felt quite luxurious. Each couple had their own, with a private bathroom and a little porch. I felt like I was in the tiny house show. There was also a great restaurant, filled with families, many in Islamic dress but an equal number in western garb.

The next day it was time to venture into Albania. As a child of the ’70s, I still found it unbelievable that you were permitted into that country, which was historically one of the most closed off places in the world. The first part was uphill through a dark and gloomy forest. It was overcast and quite humid. Finally the sun started to break out, and we reached the tree line, through more meadows and to the top of the first peak of the day. From that peak we descended along a saddle and back up along a very exposed ridge that connected the peaks. We could see Albania. But there was another peak yet to be climbed! 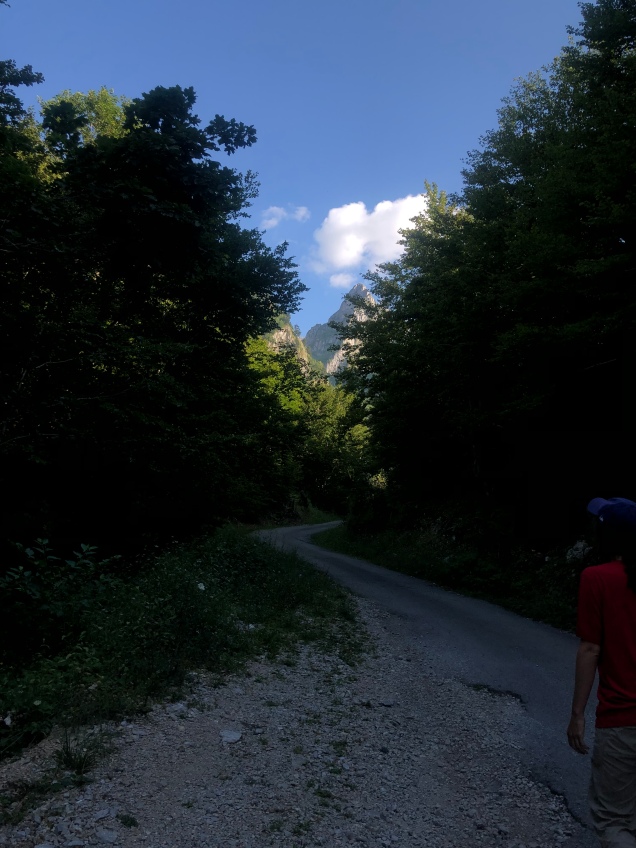 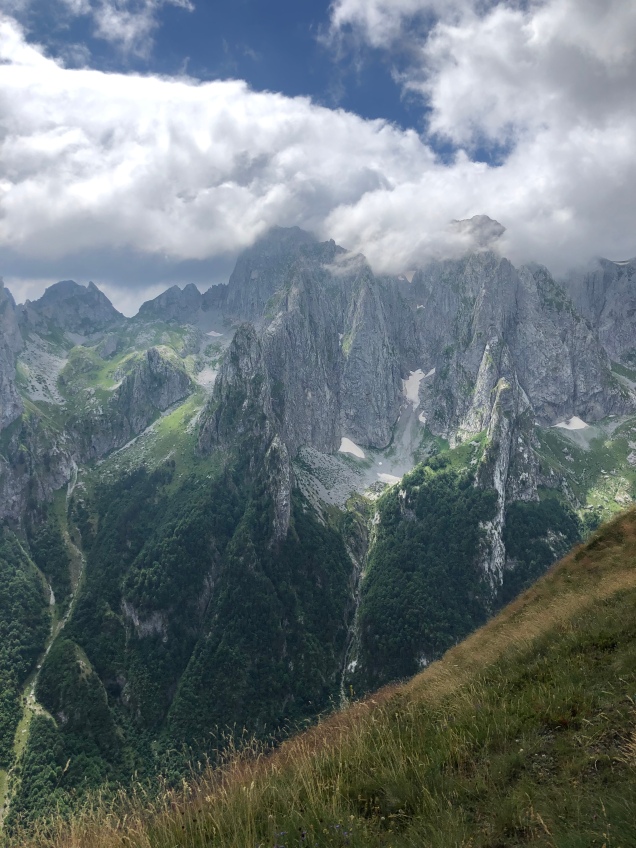 Sheer drops were on either side of the ridge trail but that didn’t seem to bother the flocks of goats that were cavorting along the hillsides. The Accursed Mountains loomed over the trail, steep sharp crags etched against the sky. The wind finally died down and we were able to stop and take a lunch break on the top of the second peak. 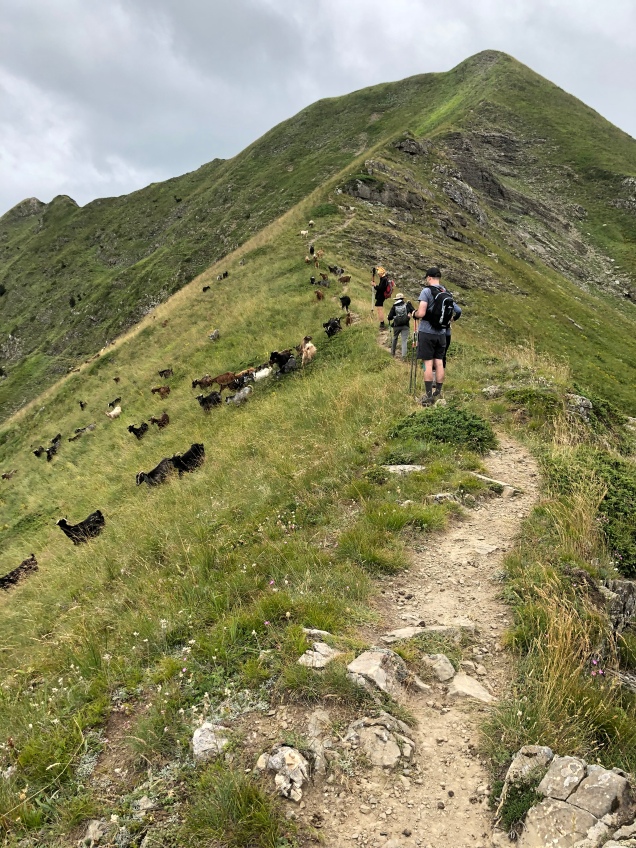 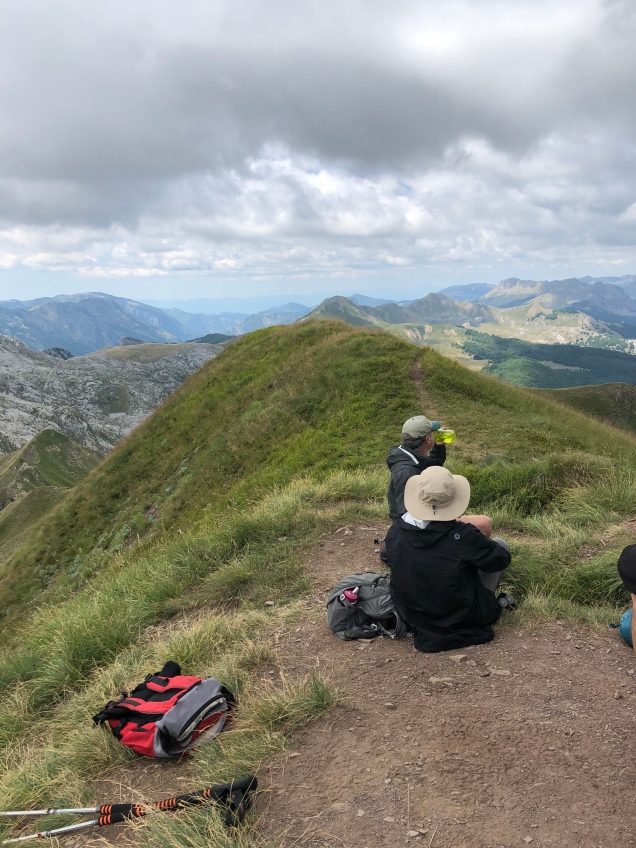 We took our time on the long meandering descent, finally walking into the little village of Lepushe, Albania for another home stay.  There, J, me, A and N shared what must have originally been the kitchen.  It was quite convenient to have our own sink in the room.

We arrived about mid-afternoon on an absolutely lovely day. One other small group was staying but it was clear we were in the middle of nowhere. Boys were racing a donkey and a horse in the dirt street; the owners gave us a tour of the restaurant they were building out of stone next to the house. I’m also pretty sure we say our dinner being butchered on a stone slab.

We watched the sun sink over the Accursed Mountain, suddenly turning the steel grey into a soft pink. I guess that’s sort of how I felt about Albania. 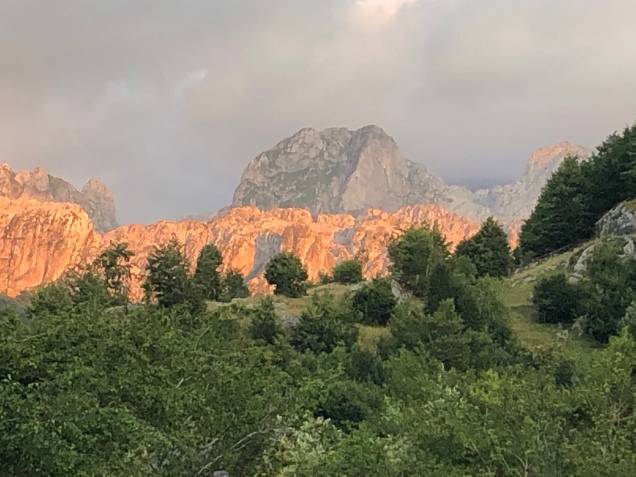 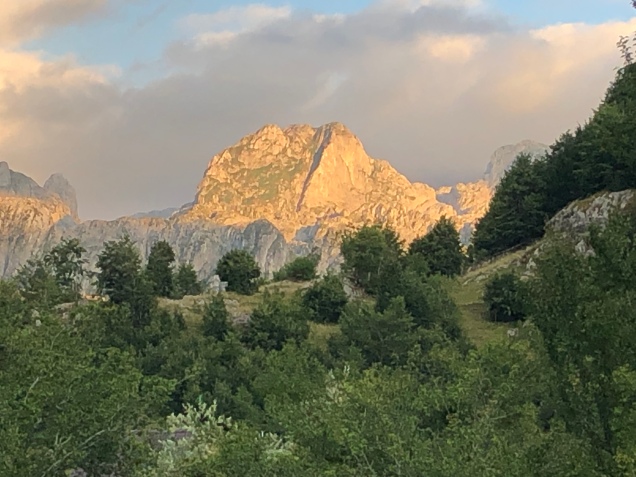