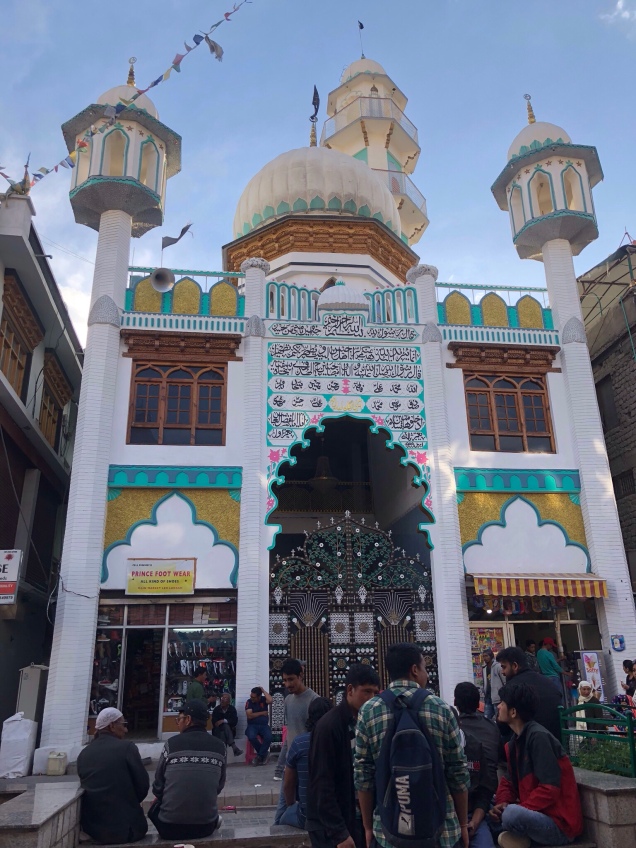 The first night in Leh – our night’s sleep was punctuated by the sounds of very loud people in the hotel courtyard, followed by a heavy rain storm and a cacophony of barking dogs. I quit trying to sleep at 5:30 a.m. Breakfast finally started at 7:30 – eggs to order, poori, chick peas and corn.

That day, Tuesday, our second in Leh, Ladakh, involved a two hour drive along winding roads cutting through the mountains and following the river to the Alchi Monastery. A few villages along the way but the main outposts of civilization seemed to be multiple military bases. 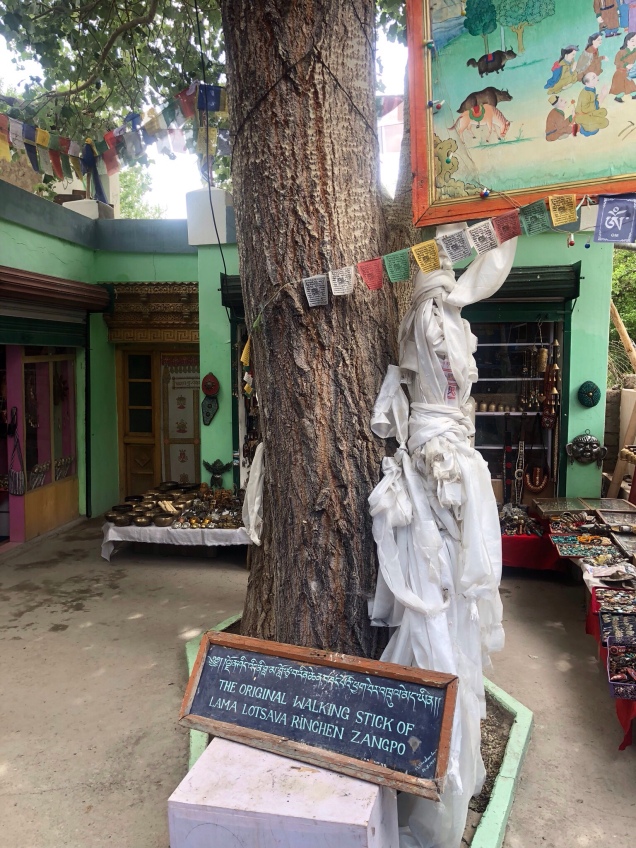 The oldest parts of the monastery were 1000 years old, and show Mogol influences – before conversion to Islam. Our guide R gave an interesting description of his brand of Mahayana Buddhism. We had a typical lunch at a restaurant at the monastery – cheese in red sauce, potato curry, dahl, local vegetables.

Along the way was the remarkable view of the Indus River merging into another – the Crest toothpaste like blue into the murky brown. Especially notable were the carved signs of the road construction companies advertising their work. 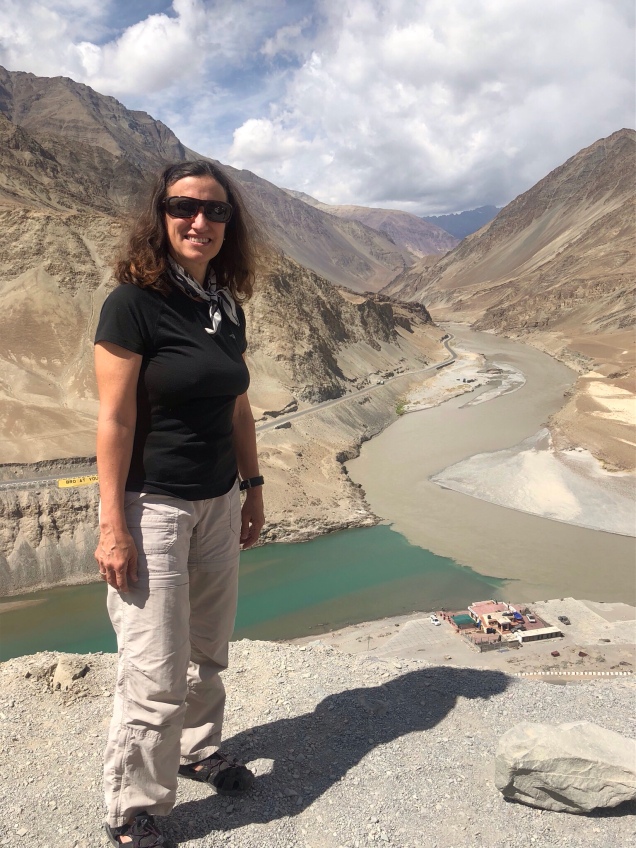 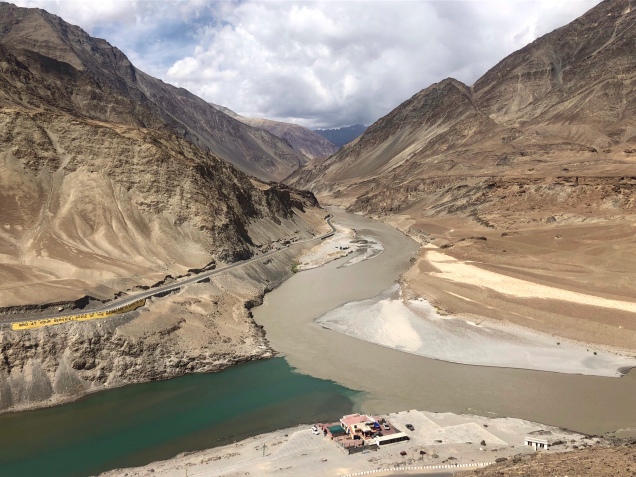 After we returned from the monastery we had some down time until 5:30, when we met up with R for a short acclimatization walk to the big stupa at the edge of town. After a climb up 500 stairs, we were rewarded with a great view. And to reward ourselves further we ventured to “Food Planet,” a roof top bar where people who weren’t worried about their VO2 levels could order hookahs. 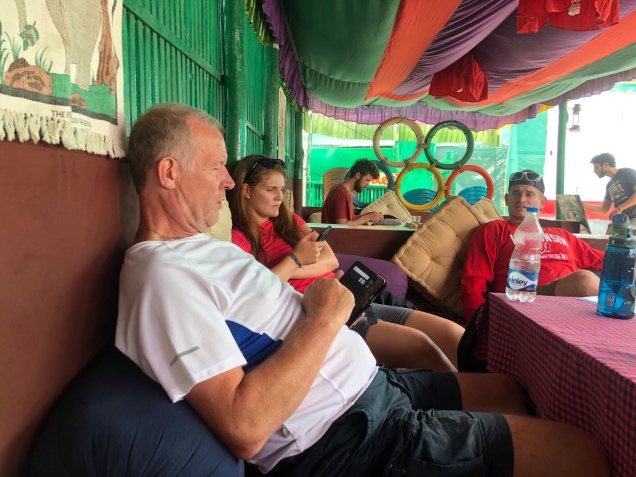 Wednesday started off on a sad note as one of our trekkers, V, encountered some medical issues that resulted in his having to return to the UK. And two others, M and M, were off at the doctors for colds! A bit daunted by the early reduction in our ranks, we took off on yet another acclimatization hike. Wove through crowded streets and alleyways by very large houses, many of which were under construction. Because of the weather, construction can occur only during the summer months. Spent quite a while watching the outdoor assembly at an elementary school.

Finally we broke from the road and went up a very steep trail, with switchbacks up to the top of an over 13,000 foot mountain. There are so many such peaks here they don’t even bother to name them. 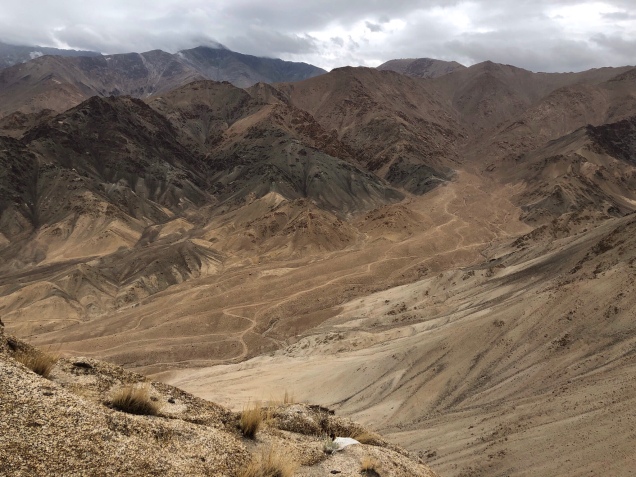 I was steady but definitely the slowest – felt the altitude a bit. We were going rapidly and I felt I did ok. There were actually two summits with some fun scrambling in between. And coming downhill was great.

These early hikes are so odd – you can tell the guide is continuously evaluating you- not just to make sure you’re ok at the moment but to get a sense of how you’ll do when you are really at altitude and facing the summit and whether you’re ready.

We re-entered Leh by the 16th century Ladakh palace. A very plain, large fortified structure now empty. The current “king” of Ladakh – who no longer has any official status – is still alive and lives in a nearby village. Stripped of power but apparently not money.

That afternoon J and had our one splurge and purchased an old, intricate kilim (woven rug). It tells a story – you can see where the weaver started to run out of wool and and misjudged the layout of certain motifs.

One more day in Leh before our trek was to begin….and a day we’d all been looking forward to – a drive to the second highest drivable pass in the world. I was sitting in the front (motion sickness doesn’t improve with altitude). Many Indian tourists who had no acclimatization at all on motorcycles heading up to the pass. And many T-shirts promoting it as the highest drivable pass in the world – with lots of motorcycle graphics. The higher we got the more hairpin turns there were and the less the visibility. I simply didn’t look out the window for large parts of it.

The pass was highly militarized and we had to show our passports to move forward, even though we were still in the same country. We also learned that satellite phones and detailed maps were completely banned in this part of India. So much for my rescue plan at the summit.

We were now at 17,500 feet and it was freezing with light snow. I was grateful I’d dressed warmly and had my hiking poles – those who hadn’t were pretty miserable. After we stopped we struggled up a nearby hill – quite icy and couldn’t go as high as planned because it was simply too slippery. 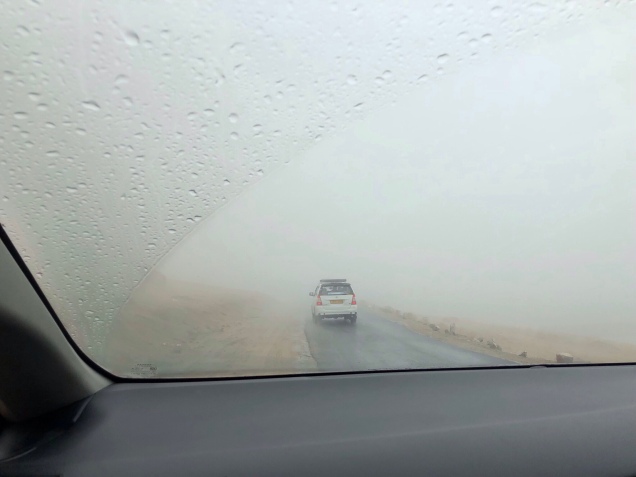 But what was near the top was a small hut, lots of burning incense – and an oracle – a woman in a purple and yellow shirt dancing around the hut screaming and chanting. It turned out the day was a holy day – the one time a year that the oracle – from a local village – comes to this spot. Other villagers were there to light the butter lamps and pay appropriate homage. I think C from our trip has video. If he reads this he should add it to the comments.

After a very quick tea at the crowded small tea house – where most were huddling to stay out of the cold – we drive back down through a steady rain that only occasionally cleared.

Once back, we had a delicious lunch of momos (dumplings) and listened to R give our trek briefing for the next day. J and I went back to town to pick up some last minute things – amidst the pouring rain in what was supposed to be the dry season.

In the meantime, S had somehow managed to run into a rabbi doing evangelical work in Leh. He got into a conversation about the synagogue his wife attended in Alaska and ended up with a dinner invitation for 10 pm at night. He may be the only American/Alaskan to experience a Lubavitch Jewish dinner in Northwestern India. Just another example of the unexpected things that can happen in Ladakh.

The next day – the true Odyssey started. The one to Stok Kangri- where I started this series – Days 1/2 – The Stok Kangri, Ladakh, India Expedition.  But there’s still more left- after the trek, Base Camp, the summit and the Death March down – there was still our stay in Delhi. That awaits.