Now that we had made it to base camp at approximately 16,400 feet, the waiting began. The afternoon we arrived we were sent off on a very steep hike up the beginning of the summit trail. Our guide assured us this would actually be the most difficult part of the trek as we’d be doing it in the dark and the cold, so it was a good idea to know exactly what we were in for. It turned out to be a steep dirt trail with decent exposure, but quite doable – at least in the daylight. Plus, it appeared a flat stretch immediately followed, which would hopefully give some incentive to keep on going.

In the meantime, our ranks were dwindling. IB developed an upper respiratory infection and left to hike down to Stok Village the day after we arrived at base camp. M and M started to feel the altitude and after the delay in our summit schedule (more on that below) also decided to make the trek back rather than attempt the summit. This left J and me as the two most senior members of our band of would-be summiteers.

Base camp was bizarre. Lots of tents and any number of other groups, all with varying degrees of acclimatization. A lot of people attempt this mountain woefully unprepared. 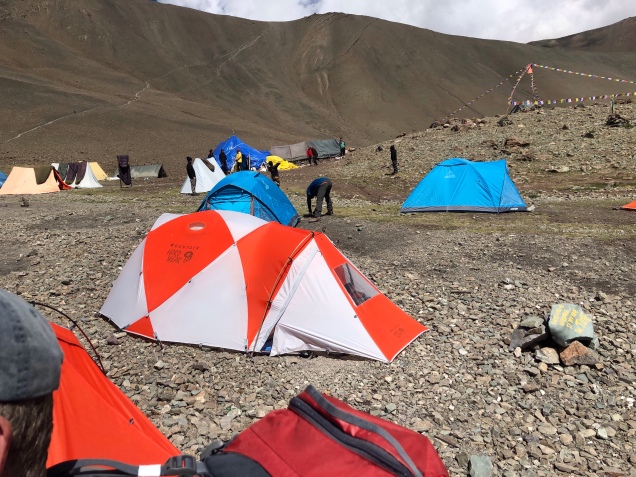 There was a tea house selling beer and sundries – I never actually saw the inside; somehow I got it into my head that visiting it would undo everything I’d achieved in the past week and impede my chances of a summit. Such fears didn’t deter a few members of our group who came back with lots of stories about the characters they had met there – some of whom seemed to be suffering from the early stages of altitude sicknesses or else were just genuinely odd people.

Base camp was also home to a collection of toilet tents which kept getting moved to higher locations such that it was a hike even to reach them. Speaking of which, the ecosystem at the base camp is simply unsustainable. There is an entire area pockmarked with latrines  now filled in with dirt and rocks – you have the sense that at any moment your boots could go crashing through into who knew what nastiness below. Think toilet crevasses.

With that charming image in mind – what else happened at base camp? Well, the plan was to rest on day 2 (July 4) and take off about midnight that night. But the weather gods were having none of it. After our walk up the initial portion of the trek that first day there, the weather turned very on and off, with sporadic showers of what can only be described as snow pellets – small round almost gravel shaped things. I felt a long way from Florida. 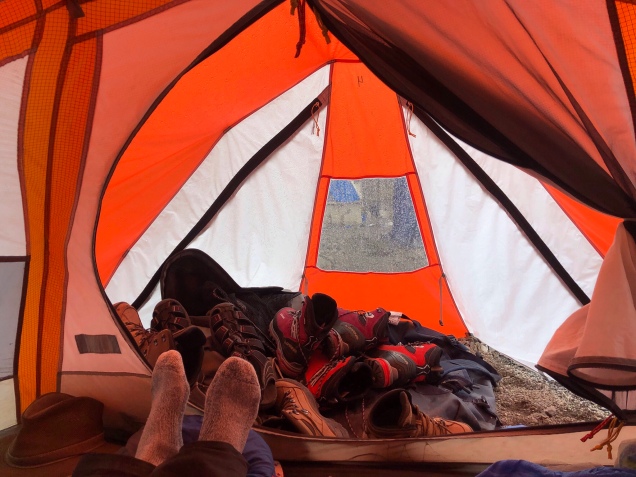 The next day, July 4, did not greet us with any better weather. It was foggy all day, with intermittent snow and hail. We were supposed to be resting and there really wasn’t anything else to do anyway. We began to gauge visibility by how many horses you could see on the mountainside. In the morning we did some rope travel and crampon training but we basically didn’t move all day, and I was finally starting to feel I’d had a lot of sleep.

By mid afternoon the snow had started to accumulate on our tent and we heard that many groups had decided not to attempt the summit that night – by then you could hardly see your hand before your face. Apparently one group made a different decision and a 29 year old trekker died that night up on the mountain because they couldn’t get him down after he started to experience serious altitude sickness.

We carbo loaded that night with delicious Nepalese dumplings (momos) but with the knowledge that if weren’t awakened between 11 and 12:30 am we would not be going that night and would have to use our buffer day for the summit attempt. Camp was crowded and you could hear horse bells clanging and conversation all night but we slept anyway. At 12:20 am R came by to confirm. We weren’t going and breakfast would be at 8. It was a relief simply to know, one way or the other.

This put our departure on the night of July 5 and summit attempt on July 6, the Dalai Lama’s birthday, so we all hoped for an auspicious day. In fact, the day dawned beautifully and conditions looked great. However, we knew we were in for a long haul because we were going to have to hike out to Stok Village the same day as our summit attempt. More on this later.

That morning we hiked up to about 17,400 (1000 feet elevation gain) just to get ourselves moving. Quite steep but confidence building. Tents were nice and warm and after another huge dinner we settled in to sleep for a couple of hours before our 10:30 pm wake up, trying to ignore the sounds of the pick up cricket game nearby.

Eveyone was tense as we gathered for “breakfast.” J, S and I were in one group and the faster (and younger) climbers were in another. We’d packed and repacked our packs and slept in our base layers (for the second night) so we were ready to go. I ate one of the thick pancakes, little realizing that would be the last solid food I’d have for over 24 hours.

We trekked more or less as one group up to what used to be the high camp. If they still allowed camping there it would have made our day much easier! We then split into our two groups. We were trekking in the dark, so you couldn’t see the exposure and only felt the steepness.

After a couple of hours, we eventually reached the glacier – it truly was a relief to suddenly get to a nice flat area. But on the other side was a very steep snow and rock slope – we stopped at the rocky area, to put on crampons and harnesses and rope up. At first our guide wasn’t traversing but just forging straight up the side of the mountain – but I think he then realized we (or at least I) needed an easier S curve. Next came a series of upwardly sloping river beds (more of that pesky glacial moraine) and steep rock climbs up. There was really very little snow by that point. The air was thin, and getting into a steady rhythm of breath and step and climb and breath was critical.

The sun was rising as we approached the ridge, and there was a spot to drop our packs.  There’s a high level of trust at over 19,000 feet. For some reason I had thought the ridge would simply be an exposed path nicely meandering along the mountaintop to the summit. To the contrary, it was a series of jagged rock formations, each of which had to be climbed up or around. I could never figure out which the super steep wall was supposed to be because they all felt equally damn steep!

At a certain point S looked at his watch and we were already at 19,600 – 300 feet above our prior best on Cotopaxi in Ecuador. Somewhere along the ridge we passed the other group returning – all had summited, although they, like us, were all looking a little the worse for wear. It was now about 8 am and we’d been climbing for 8 hours. R said if we weren’t at the summit by 9 we’d have to turn around.

That gave all of us, including our two Sherpa guides, the impetus we needed.  They set up safety ropes into a series of what S called running (or free) belays, and with their good guiding skills we made our way up, by hook and by crook. We reached the summit with 30 minutes to spare. J, S, and me. About 8:30 am and all 20,187 feet of it. 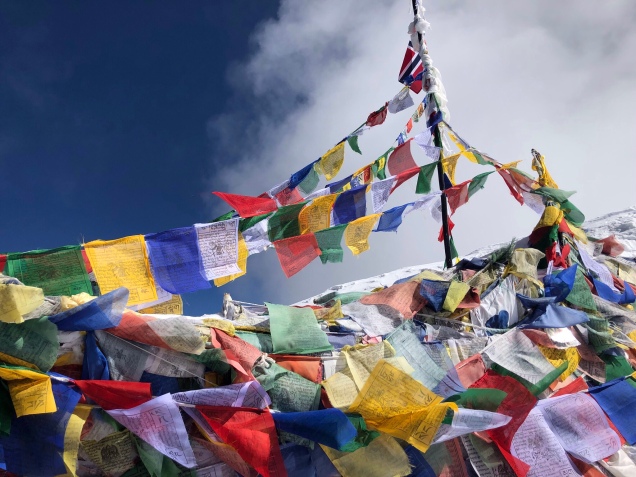 It was clear and blue and turning to cloudy. The prayer flags flapped their brilliant primary colors, sending mantras out on the winds for all to to receive. We had done it.

But, as we all know, what goes up must come down again. And what a descent it was. The adventure continued.

4 thoughts on “The Peak – Summit of Stok Kangri, India”