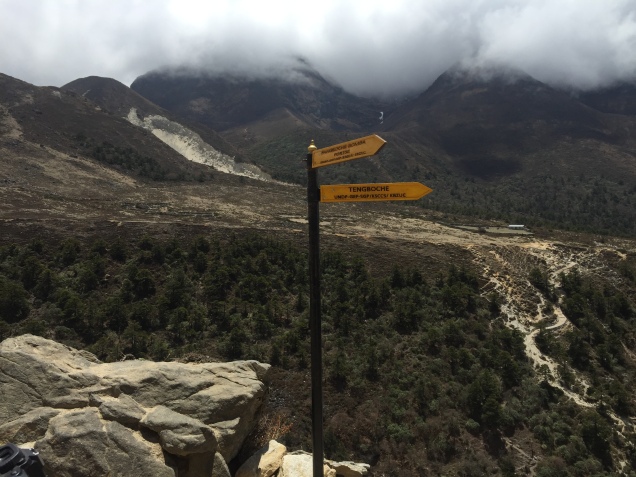 It felt as though we’d already had a full day of activity – after all, we’d just peered at Everest from 18,200 feet at the summit of Kala Pattar – but we had hours of trekking ahead of us. After breakfast in Gorak Shep, we headed off to Pheriche, via Lobuche, where we had stayed two nights ago. We had lunch at the same tea house – the Oxygen Altitude. Such an appropriate name – M and S suffering a little bit – sometimes the way down is actually harder than the trek up.

After lunch in Lobuche, we traversed again past the memorials to the dead Everest trekkers (this time getting a photo of the one in honor of Scott Fischer – after all, his old company, Mountain Madness, has been responsible for a lot of our adventures), and then down what had been a very long uphill on the way to EBC. After a bit, we made a right turn and headed into previously unhiked areas toward Pheriche.

We descended into a wide flat valley with spring grasses and flowers sprouting up. The monsoon was starting early this year, and we experienced a bit of hail, followed by rain. The wind picked up, and we marched along stoically, picking our way amid puddles and piles of yak dung.

We finally reached the village of Pheriche and our abode for the night, the Himalayan Hotel. It was the nicest place we had stayed for a while. Each room had its own bathroom and there was a huge dining room.  I had dahl bat for dinner. J and I were both exhausted after climbing Kala Pattar and then hiking five plus hours mostly in rain. But we were at a lower altitude and it’s amazing how well you can sleep lower than 16,000 feet – especially with an en suite bathroom.

I awoke without a headache for the first time in a while. For me, at least, altitude just does that. You learn to live with a low grade headache each morning –  but two ibuprofen and two cups of coffee typically take care of it.  We took our time and finally departed about 10. There was a lot of downhill and then up along the side of the valley with the milky river below. 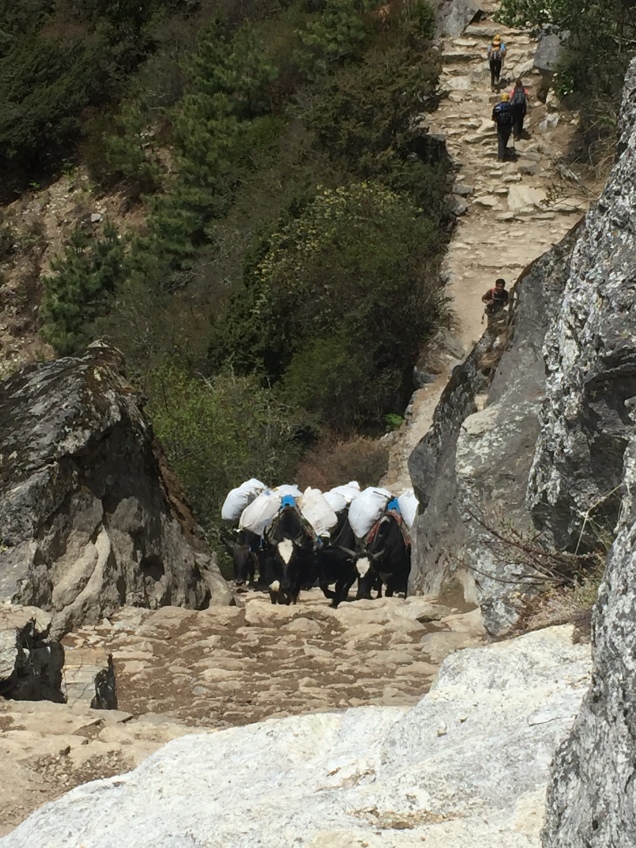 Stopped for some bathroom breaks at various small villages; we were moving back into village culture. Mani stones and stupas were the order of the day again. At the Wind Horse Lodge – the elderly owners sat outside in the sun. The man had a mala in one hand and an individual prayer wheel in the other – as he spun it the mala beads slipped through his fingers, effortlessly counting his prayers. His wife wore the traditional apron over her brown skirt – topped by the ubiquitous down jacket that everyone wore.

This time, instead of Upper Pangboche (home of the flying monk – recounted in Everest Base Camp Trek – Tengboche and Dingboche (or Lost Horizons)) we went through Lower Pangboche. It was an active little village, with juniper incense burning outside many of the tiny shops. By now blisters were running rampant and I was the cause of the next stop for foot care issues.

We had descended to the tree line now, and wild purple iris were starting to reappear. We crossed the river a couple of times, and then made our way up a long uphill through the rhododendron forest back to the placid setting of Tengboche. It truly was a Shangri La moment, and even more pink and purple spring flowers had bloomed since we were last here. We had lunch and hung out in the dining room, watching the grey mist settle in over the grazing cows and horses. Despite this, a group of monks in their crimson robes made their way across the meadow into the neighboring field for an energetic game of soccer. We did nothing so energetic. Instead, our little hiking group engaged in a lively game of snakes and ladders on one of the many board games in the dining room. 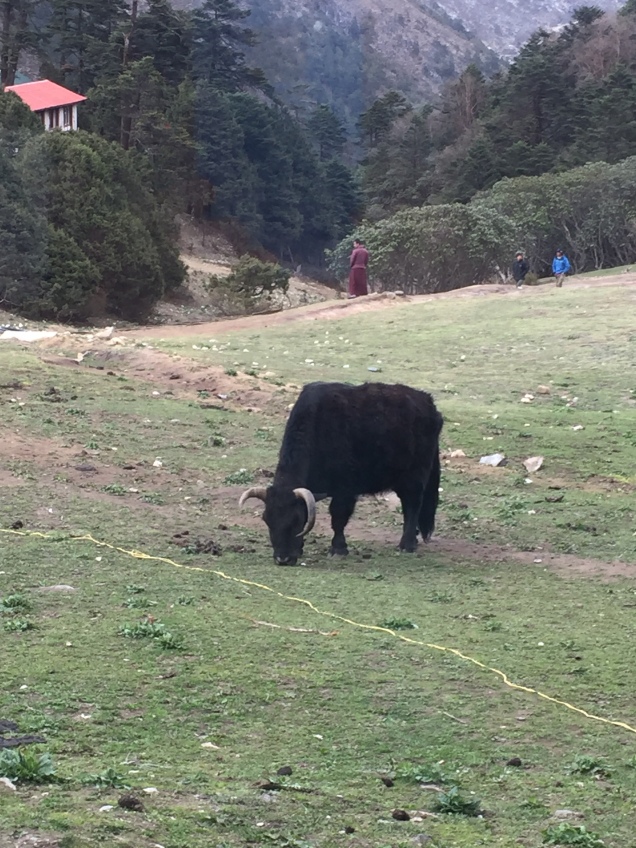 The next day we had to make our way to Namche. We’d walked this path before. But it looked totally different from the opposite direction. I think this is possibly the most beautiful part of the whole trek – and possibly any trek. It was nearly all rhododendron forest – crimsons of all shades, steep snow-capped mountains, clouds, and blue skies. The rhododendrons were so bright you could see splashes of colors in the distant mountains like fall leaves. 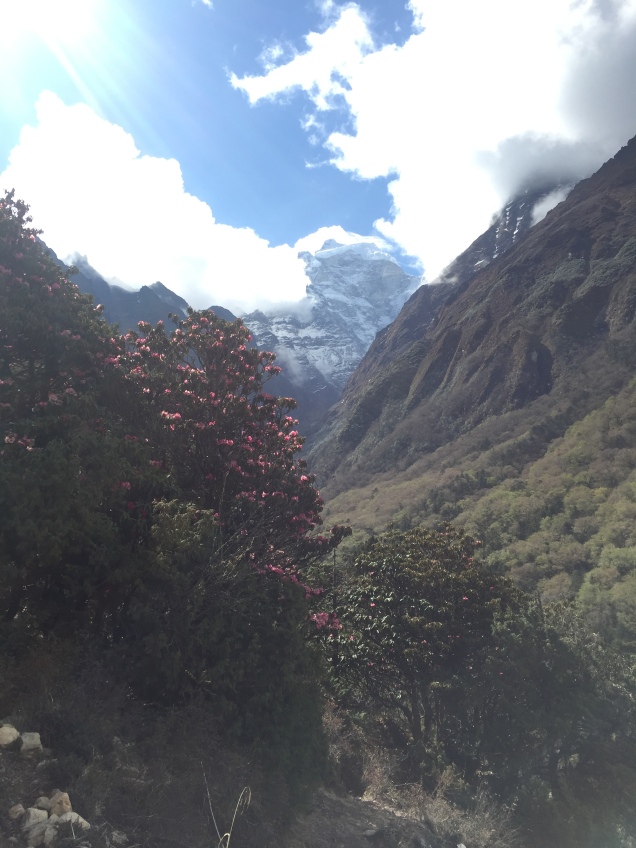 At one point we saw a musk deer, unusual for this area. They are hunted for their musk glands, and grow long canine teeth.

It was a relatively short hike to Namche and we were back at the now familiar Himalayan Culture Home by lunch.  It seemed warmer this time. In the afternoon we climbed a series of hills to the rather dilapidated National Park Museum (most notable for the Tenzing Sherpa statue) and the Sherpa Culture Museum. It is an odd place. Owned by a man who had lost his hearing to meningitis, didn’t go forward with his education and instead opened the museum. He’d hosted Sir Edmund Hillary in his later years. We were ushered into a dank and moldy basement where we sat on folding plastic chairs and watched a 20 minute slide show about Sherpa culture projected on the wall. And the inspected the very impressive – but not updated – photos of every Sherpa Climber who had scaled Everest.

We had an early night that night (not that any weren’t early).  The next day we had to make it all the way to Lukla. On the way, this had taken  us two days and now we had to do it in one.