For what it was worth, it was Wednesday. By now days of the week had ceased to have much meaning. It was an overcast day, good for hiking, which I hoped would assist with the very long last day of trekking that lay ahead.

After fried eggs and Tibetan bread (similar to a puffy naan), we departed Namche on a very steep and stony trail that descended almost all of the way to Phak Ding, where 12 days ago we had stayed at the Snowland Hotel, our first tea house. We had lunch at Hermann’s, a Western style bakery and sandwich place. By day 12 our guide apparently felt we needed some encouragement and familiar food to face what he warned us was going to be a long afternoon of uphill climbing to reach Lukla.

Even though we’d trekked most of the same route before, going the other direction made for a totally different experience. Flowers had bloomed since we were last there, and asters, pansies, amaryllis, and roses adorned the small villages.  We keep expecting to find Lukla around the next corner, only to be disappointed. One exhausted trekker had resorted to horseback – he appeared to be lashed onto the horse while two guides hauled them along the trail.

After seven hours or so we started to encounter more people, including loads of school children wearing blue and red uniforms. After several more turns – each of which we thought must be the last one – we climbed one last set of stone stairs and there was the arch from which we had started twelve days and many thousands of feet of elevation before.

That night we stayed at the same hotel where we had had tea before starting the trek. Dinner was a celebratory affair – our two porters both attended, and we finally learned more about them. They were both 18, and were awaiting their university entrance exam results, which had been delayed due to the political situation in Nepal (the reasons for which still elude me). Their village was two hours from Lukla, and they had lived at a hostel for their high school years. 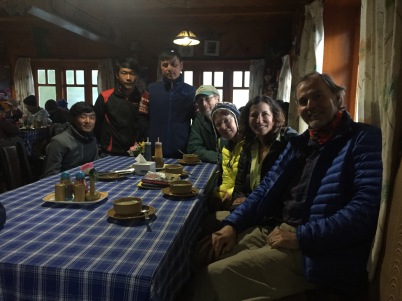 Our night’s sleep was disrupted by music and loud altercations from the downstairs disco, interspersed with the sounds of barking dogs. We found out the next day that apparently one group of porters had been quite unhappy with their tips. A reminder that what was holiday for some was work for many.

We all arose at 5 to walk to the airport. The plane was the first motorized vehicle we’d seen for almost two weeks – in fact, the first wheeled vehicle of any sort. 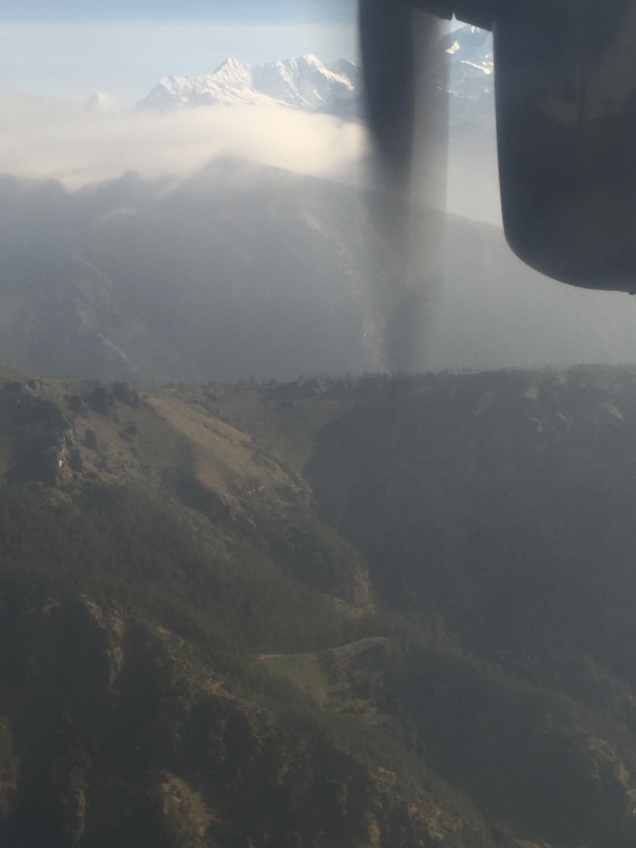 We boarded our remarkably named Tara Airlines flight, buckled in, and took a deep breath.  The plane fell off the end of the runway into a cavernous valley and then climbed to the level of the lower green peaks, snow capped summits towering in the distance. We were flying – but we’d been even higher at Everest.