For the last several years, we’ve spent that most politically incorrect of all holidays, Columbus Day, either in New Hampshire or Maine, together with Boston and New Bedford residents Daughter A and Boyfriend N.

And despite hurricane force winds in Florida, courtesy of Hurricane Matthew,  this year was no different.  Of course, we had planned for a Friday departure, but after even my office announced it would close for both Thursday and Friday, I was pretty sure that wasn’t going to happen.  But it still took our So Budget It Shall Remain Unnamed airline until 4 am Friday to cancel the flight. For some unknown reason I’d woken up almost at the precise moment of flight cancellation and hence was able to have rebooked us before 5 – after which I immediately went back to sleep, lulled by the 60 mph wind gusts.

Saturday we woke bright and early to inspect the debris in the yard. The wind had howled most of the night, but Matthew’s 20 mile jog to the east had made all the difference. We made it to the airport, our one checked suitcase within one pound of an excess weight charge.  All was going as smoothly as it could for a 24 hour delayed flight, until we learned that our Unnamed Budget airline had apparently forgotten to tell the first officer he was supposed to be on that flight. After about an hour, said Unnamed Budget airline snagged two pilots who had just arrived from Texas and who agreed to rearrange their schedules to fly us to Boston.

We finally arrived in Boston about 7 pm. After dinner at a nearby Peruvian restaurant (with Pisco Sours!), N drove us through the night in the old faithful Previa to Jackson, New Hampshire.

We had left our reservations late and knew we weren’t staying at a quaint New England B&B. Instead we were booked at an old style motel, run by a crusty elderly man who had clearly been asleep when we had to ring the service phone after we arrived at midnight. I must admit to a brief moment of panic when I saw all the lights off in the office and the no vacancy signs at every establishment in town.

But we managed to get ourselves checked in and even to wake up  by 7 or so. Well, 7:30.  Our original plan had been to climb Mt. Jefferson and then go over the ridge to summit Mt. Adams. But given the late start and the overall hassles of the last few days, even we recognized that perhaps that was overly ambitious.

We gave A the choice between a shorter and steeper climb or a longer and more gradual one.  Ever the pragmatist, she went without hesitation for the shorter one – Caps Ridge.

It was about an hour drive to the trailhead, which was quite well hidden down a dirt logging road. It was a relief when we finally found the small parking lot and saw other hikers getting ready to start. 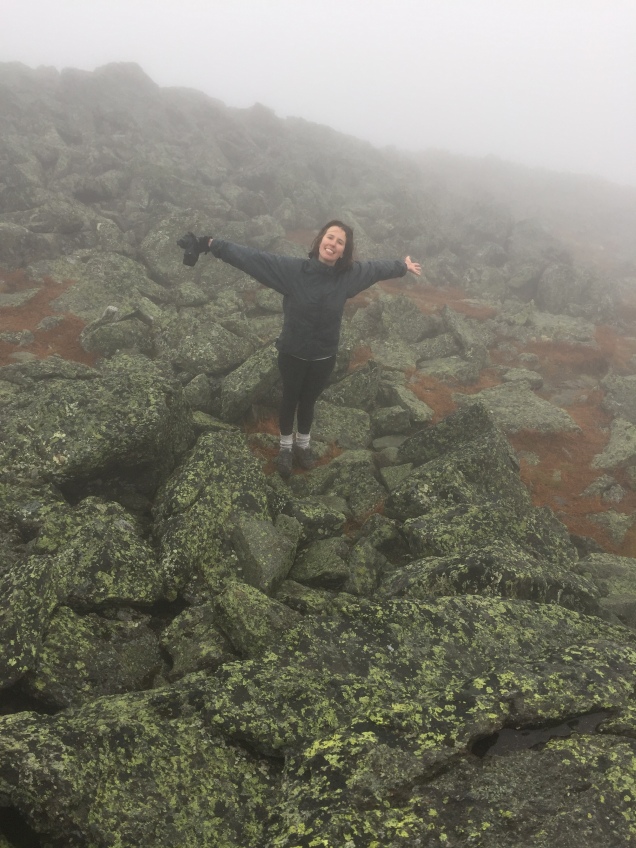 The trail starts with a fairly steep climb through thick woods. It was overcast and grey and proceeded to get more overcast and grey the higher we climbed.  After a bit, the trees turned into skinny short birches, their white trunks looking vaguely unclothed with ribbons of grey bark hanging off them.

From the birches we climbed through scrubby pines and finally above the tree line. At that point, the bit we hadn’t been expecting – some real scrambling and rock climbing – suddenly appeared. Frankly, I thought it was harder than Mt. Washington up the Tuckerman Ravine Trail – although it certainly was shorter.  There were at least three sections where we were looking for cracks to scale and I made good use of the shrubs growing on the sides as handholds. A had neglected to bring any gloves and J ended up doing it all bare handed.

Toward the top there was a section of big boulders, covered in lichen, where you balanced along the edges of one rock holding on to the one above. It was like some crazy jungle gym that you had always wanted to try in kindergarten.

By that point it was all slippery and even greyer and A was showing tremendous resistance to the idea that a summit was really necessary, wisely reminding us all that what goes up must come down. But at that point, striding out of the mist, came a European climber who looked as though he’d just left the Matterhorn. According to him, the summit was only “10 or 15 minutes” away.  Despite the fact we were now experiencing sharp dry pellets of hail, that gave us the encouragement we needed for that final push up.

We had made a commitment not to waste time at the top because we had all those sections of rock to slide down. And slide we did. My favorite part was when I saw a foothold several feet below my legs, and figured if I just started the slide I could grab on to a nearby branch halfway down to break my fall. Not very elegant, but it worked.

I ended up climbing a good portion of the way down solo. As I’m usually the slowest going up, I feel I must make up for it on the way down. I had a good head start and it seemed a mistake to intentionally reduce my pace. But voices don’t carry well in the mountains; I couldn’t hear my fellow hikers; and I spent a fair amount of time worrying I had drifted on to a rabbit trail or a dry stream bed and would plow further into the wilderness, never to be heard from again.  And, I was without a phone since J had forgotten his and was holding mine to take photos.  Big  note to self. One group should not have all the phones!

Regardless, it was back through the scrub, the birches and the woods, and I was sitting on a log waiting for the other side when they reappeared not too long thereafter.

We were all absolutely filthy and wet. Back to our little motel, showers, and out for a short walk and dinner. The weather cleared and the brilliant fall foliage that we’d been hoping to see all day was finally reflected in the orange pink sunset. 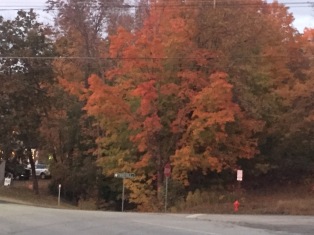 And how better to conclude our climb in The Presidentials than by watching the presidential debate. Jeffersonian it was not.