I want to go back! While we may not have made it all the way to the very top of Pico de Orizaba, Mexico City was its own sort of summit.

The day before we left for Mexico City – when we were attempting to scale the mountain – all the corn that had been drying on the rooves of the village houses had been fed into some monstrous and loud machine that stripped off the kernels.  Now, burlap bags of corn were stacked in front of each house, apparently waiting to be picked up for market.

We had a several hour drive back toward Mexico City.  More and more fields being plowed, with nary a tractor in site.  Corn was being stored in strange concrete pyramids – agricultural homage to the great pyramids of Teotihuacan, perhaps? 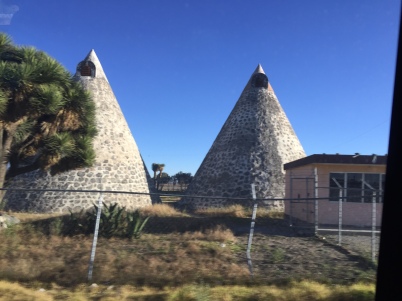 Eventually our time travel back into the ancient means of corn production ceased, and we fast forwarded into the heavy traffic approaching Mexico City. So unusual to look across the modern interstate and see the volcanoes towering over, one quite actively puffing smoke. They reminded me of a gathering of old men observing the neighborhood from a high up vantage point, having a contemplative cigar as they looked down.

We said farewell to our guides and our fellow climber, and were dropped off at the eminently reasonably priced Hotel Marie Cristina.  J still remembered the Anthropological Museum from his trip to Mexico City with his brothers in the 1970s (his parents actually entrusted their two youngest sons to the care of a slightly older brother for a bus trip from Mexico City to Guatamala; we still have the machetes they brought back with them on the airplanes in that more innocent world). Anyway, that’s a story for a different day.

Suffice it to say that we hopped into a taxi to go to what is effectively a museum row. A tree lined boulevard with parks on either side which houses all the major museums. The Anthropological Museum is spectacular.  Oriented around various geographical areas of Mexico, each part of the museum flows into the next. There’s a courtyard in the center of the square structure with a large water feature.

It was a beautiful sunny day, and we had lunch outdoors at the museum cafe. The wood platforms of Orizaba’s hut felt a thousand miles away.

We made our any back to the hotel and somehow managed to fit all our climbing gear back into our duffels. It remains a mystery of physics how the same items take up more space after they have been used on a trip.

In any event, we finally masterd our packing and made our way to Porfirio’s in the Polanca area, a restaurant highly recommended by G. He had told us that 8 pm was the earliest we should arrive – and sure enough, people were only just starting to venture into restaurants. We walked around for about 30 minute before, looking into windows of elegant shops and it was clear that we were in a lull before the evening got underway. By the time we left – stuffed with chicken mole and steak – it was a crowded lively street scene.

I would have loved to have seen the Freida Kahlo house, and so much more, but 24 hours wasn’t enough. But the dollar is strong; it’s not a long plane flight – and we will go back.