I’m going to rush through our time travels  in the Grand Canyon because I’m eager to get to the last part of our story from four years ago (almost to the day) – and that’s Sedona. By the way, the time theme really didn’t come from Outlanders – despite the fact I’m now on Book 6 and know more about 18th century medicine than I ever thought I would, not to mention the battles of the American Revolution. But I digress.

When we last parted, J and I had survived an icy horseback ride in Flagstaff  and had made it down to the Colorado relatively unscathed.  After an easy night camping at Phantom Ranch, and encountering various Canyon dwellers who seemed on a perpetual hike through the Canyon, it was time to head back up.

We started with a couple of nice flat miles along the banks of the Colorado, stopping by some sandy beaches where we could touch the eerily turquoise water. Finally we turned upwards, each step taking us further away from the prehistory of the deep inner Canyon walls.

We hiked switchbacks up the Bright  Angel Trail  until we arrived at Indian River campground, about halfway to the top. Have I mentioned that the Grand Canyon has the most excellent toilet facilities of any outdoor area I have ever seen? Clean, eco friendly, non-smelly composting toilets. If you have followed this blog and have seen the facilities at Mt. Elbrus in the Caucasus Mountains of Russia – or possibly worse – Pico de Orizaba in Mexico,  you’ll know what I mean. Pic0 de Orizaba is on the left below; Mt. Elbrus on the right with the barrels we stayed in just behind. And no, the black rectangle is not a shadow – it’s no door. 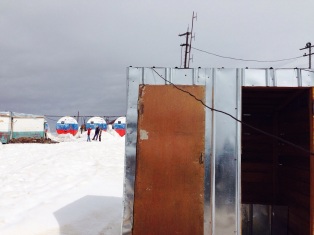 At sunset that night we hiked to a plateau overlooking the Canyon for dinner, where our talented guide managed to cook over a stove no bigger than a can of peas.  The stone formations cast shadows and the only thing marring the effect is that we weren’t the only ones there. Hiking back to our tents in the dark was an interesting experience but none of us tumbled off the steep ledge.

The next day we hiked the remainder of the trek up. It was icy and we were just ahead of a storm. I was quite happy to put on the micro spikes our guide had stored in his pack.  As we crossed the Tonto we met an elderly couple who were spending ten days hiking the Hermits Trail and others equally remote.  Weatherbeaten and dusty, they apparently did a trip like this  every year.  They seemed like excellent role models.

But all good things end, and before lunch we were back at the top and in the 21st century – where a ream of emails flooded our phones, anxiously awaiting our reading.  After a lunch of junk food – never did it taste so good- we made our way back to Flagstaff – where dinner at a cozy craft brewery completed this portion of the trip.

And then? After the time machine travel of the Canyon, there could only be one place to go – into the vortex. Sedona is next.

We awakened early for the drive to the Canyon.  The details are blurry but I remember it was quite cold, and after  we parked, we had to take a shuttle bus to the beginning of the trail. It was clear from the outset that most people were venturing down only for a quick peek over the edge and very few were as laden down as we. In fact, a number of people asked us if we were planning to move there.

Our route took us down the South Kaibab trail  to the river in one day. Once at the bottom we would camp at Phantom Ranch – in the campground; no cabins or hostel for us! The next day we were to go half way up the Bright Angel trail, camp at Indian Gardens and then hike the rest of the way up and out.

Soon into the trip it became apparent that we’d found the one type of terrain where my relatively short stature was a benefit. With a center of gravity a lot lower to the ground than the two over six foot males behind me, I discovered that I was able to practically jog along the switchbacks without losing my balance. In fact, for the first and one of the only times in my hiking career I kept having to stop and wait for the others.

The beginning of the hike was quite populated. There were bus loads of high school kids, many from abroad, swinging cameras and trying to hike in wildly inappropriate footwear. Apparently the packing list hadn’t included a section on outdoor gear.  It was actually terrifying to watch some of them teeter and totter next to what was a pretty steep tumble to the bottom.

The journey down was a trip back in time.  Starting with streaks of tan sandstone, moving down toward strips of an almost turquoise. Cell phone coverage soon (and thankfully) ceased. And as we went lower and lower there were far fewer people – although now and then we did have to move over to let the famous mule trains pass.

About half way down there is a trail called the Tonto that runs along the side of the canyon. It’s like a green stripe running horizontally and I’ve wanted to hike it ever since I saw it. And when you get below that you can start to hear and see the Colorado. It’s a ghostly shade of blue green due to the effects of various dams. The rocks shift toward  black, almost like marble, and you feel as though you have returned to the bowels of the earth.

The campground at Phantom Ranch was populated with a number of odd characters, some of whom seemed to spend their entire lives just hiking around the canyon. There’s a complex of cabins, a hostel of a type, and a shop where you can buy a postcard or a beer.

We hiked up the other side of the canyon for just a bit. The sun cast long shadows off of the black stone. As the sun set into the depths of the canyon, it took with it all the trappings of our 21st century lives, leaving us only with a pitch black cover of night, punctuated by the light of millions of stars.

One can only write about training so much before it doubtless becomes as boring for the reader as the writer. Yes, training may be the essence of preparation for long distance trekking and mountaineering – but it’s not always the most scintillating of subjects. Hence, a detour from the path towards Everest Base Camp – a week long trip to Arizona from a few years back.

When we decided to spend spring break visiting the Grand Canyon and surrounding areas I expected nothing more than the cinematic views from the classic 1960s “wish you were here” post cards. (To which the subtext was probably, “Not.”) But what we found instead was a textured and emotional place – a journey that descended through layers of earth and stone like time.

That’s not where we started though. It was very early March and we found Phoenix, where we flew into, surprisingly crisp in comparison to the Orlando spring.  Our first stop was Flagstaff. That’s where we had a free day before meeting up with our guide, who would shepherd us through a three day, two night backpacking trip down and up the canyon. We were going to finish the week with a couple of days in Sedona.

In Flagstaff we stayed at the Little America Hotel. It may have since been refurbished, but at that time the rooms were decorated in inexpensive, white and gold Louis XIV furniture. it had the feel of the home of a very elderly aunt who still served things like tomato aspic for lunch. But there was an excellent steakhouse style restaurant, which was filled with locals out for the evening.

Flagstaff itself was a funky college town, with multiple herbalists, vintage stores, and lots of iconic Route 66 paraphernalia.

But we were in Arizona for outdoor adventure, not to buy crystals, so rejected the lure  of shopping in favor of a horseback ride. Now, we’ve ridden horses in a lot of places but are nowhere close to any level of real proficiency. And there was a lot of snow on the ground. Not to mention ice.  Undaunted, however, together with a college student who was serving as our trail guide, we mounted our rather large steeds and headed off into the remote canyons around Flagstaff. As we rode further, it became clear the horses themselves were having a hard time and were sliding all over the place. Holding on with your knees as hard as you could appeared to be the only way to avoid an ignominious slide into the snow cov red streams we were crossing.

At one point, while I was holding on for dear life, I glanced back – just in time to see J’s horse completely fall down on an ice patch – fortunately J had the presence of mind to slip gracefully off the creature’s backside – narrowly avoiding being crushed by however many pounds of horseflesh.

But our adventures weren’t over. Our trail guide was breaking in his very young horse. The horse got spooked and suddenly took off at a gallop. Not to be left out of the fun, our horses took off at an equally rapid clip, and we flew along under low hanging branches until the ringleader finally calmed down and they all resumed a more sensible gait.

When we got back to the barn, the stable  made the decision that conditions were too dangerous and closed the trail for the rest of the day.

That night we met up with our Grand Canyon guide, a great guy from Georgia who also happened to be about 6’5″. J is almost 6’3″ and I’m barely 5’2″, so we made quite a picture.  He fitted us out with our technical packs stuffed full of camping equipment and food – mine towered a good six inches over my head. But more on that in the next post.

For now, we were just trying to get a good night’s sleep before our 5 am departure the next day – and trying to ignore the fact that we were starting a major trek already sore from our encounter with the equestrian world!