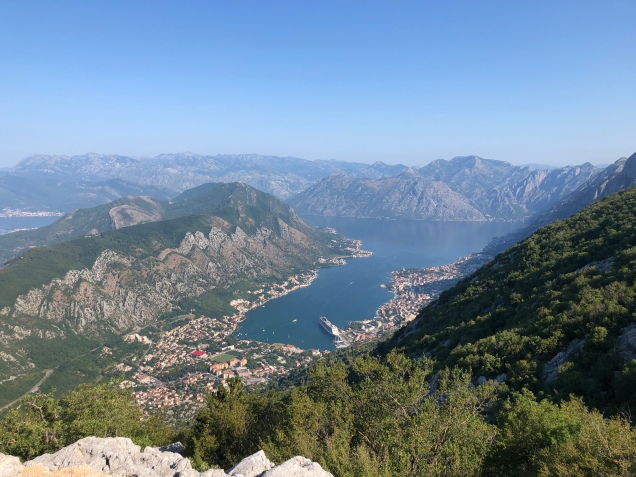 It’s perhaps a little misleading to characterize the final part of the Balkans saga as a trek. Perhaps a journey in a time machine is more like it – we were about to move from a world where our dinner was being butchered before us into the land of tourists and suntan lotion.

We started our next to the last day with a very beautiful and less terrifying drive to Kotor Bay. Kotor Bay, located in Montenegro, is filled with domestic tourists, all of whom were enjoying spectacular weather. We were also celebrating the end of the trek with much nicer accommodations – J and I even had a room with a balcony and a view of the bay. Prices went up accordingly. No more Pristina like lunches for 8 for $20 with drinks. 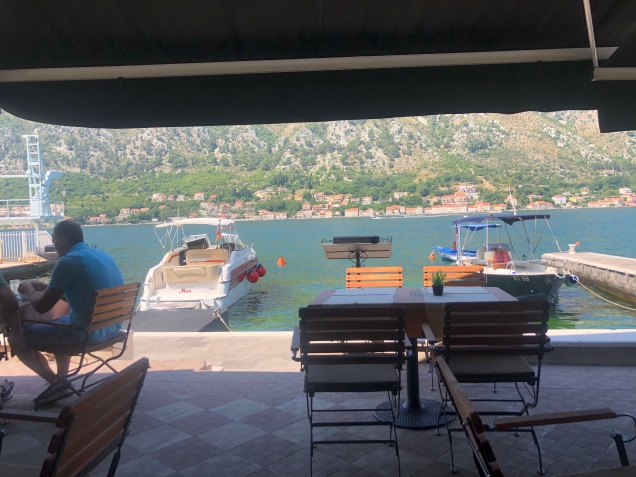 Once settled into the hotel we all walked down to the beach and found a restaurant with the unlikely name of Jet Ski for lunch. After yet another Greek salad, we walked into Old Town and visited several churches, both Catholic and Orthodox. Lots of relics (think silver gloves with a small aperture through which there is theoretically a nail clipping of a saint). Turned out to be a good place for souvenirs as well – particularly intricately embroidered linens. 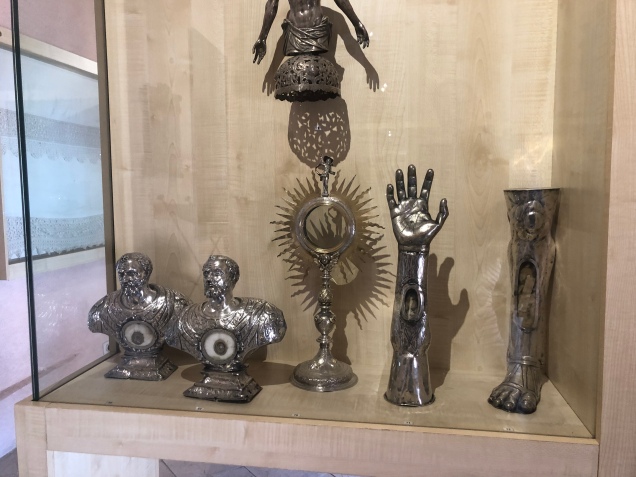 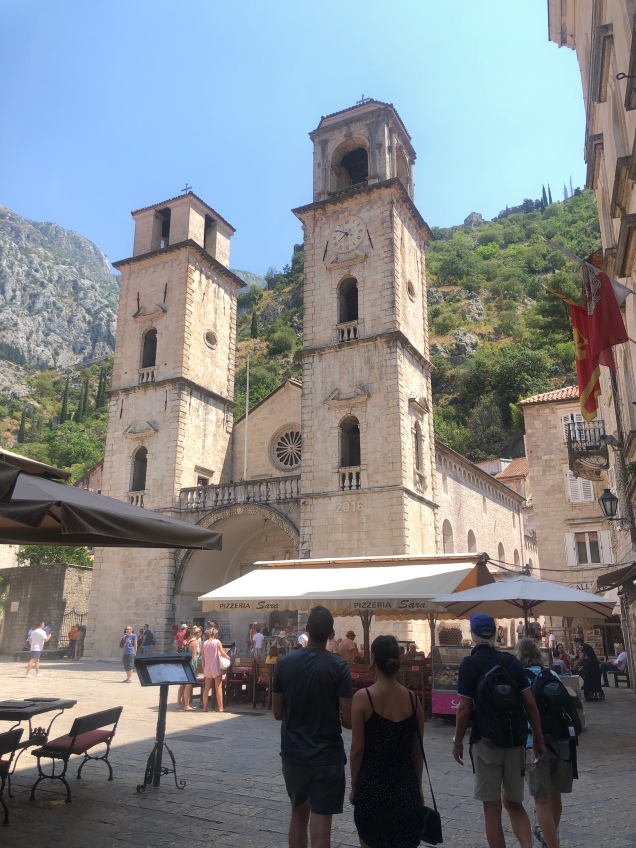 It was then time for a boat ride to Perast. For once, our legs truly weren’t our main mode of transportation. Kotor Bay is basically a fjord. We sailed down one side, past two islands, one of which was manmade, very crowded, and housed a church that looked Orthodox but was Catholic, and another that was natural, privately owned, and was the home of a church that was Orthodox but looked Catholic. So much for architectural sterotypes. 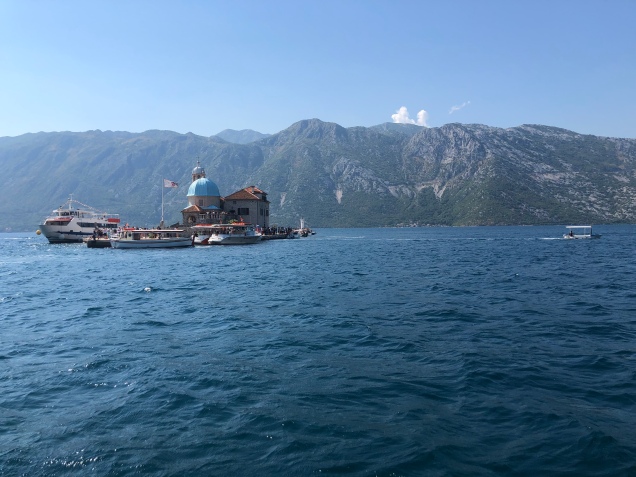 We ended up in the pretty village of Perast. the houses were uniformly built of light colored stone with red rooves (as everywhere in Montenegro), and dotted with colorful window boxes. At the end of the village was a narrow strip of concrete and gravel beach, dominated by a huge bar. It was quite the scene – a mashup of 20 year olds in bikinis and speedos, and families out for the afternoon. 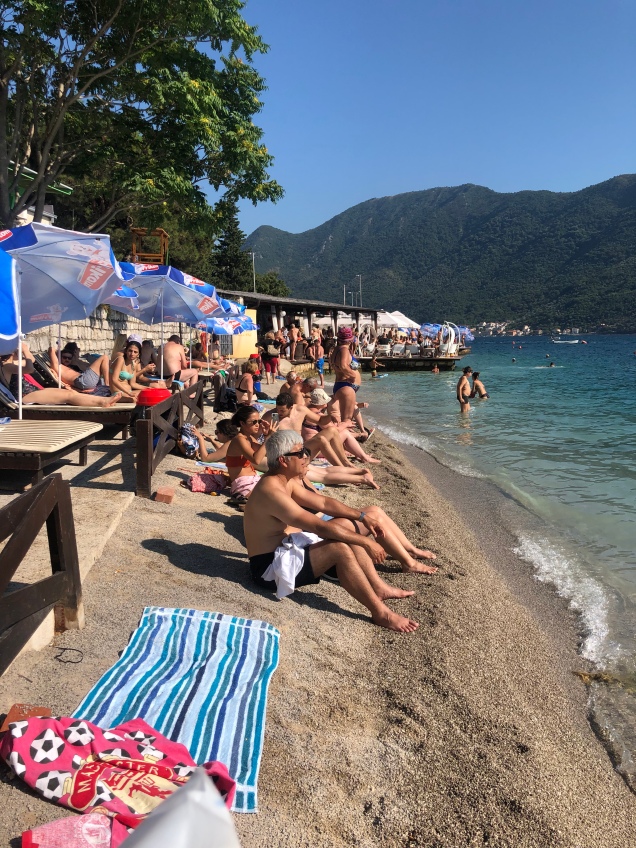 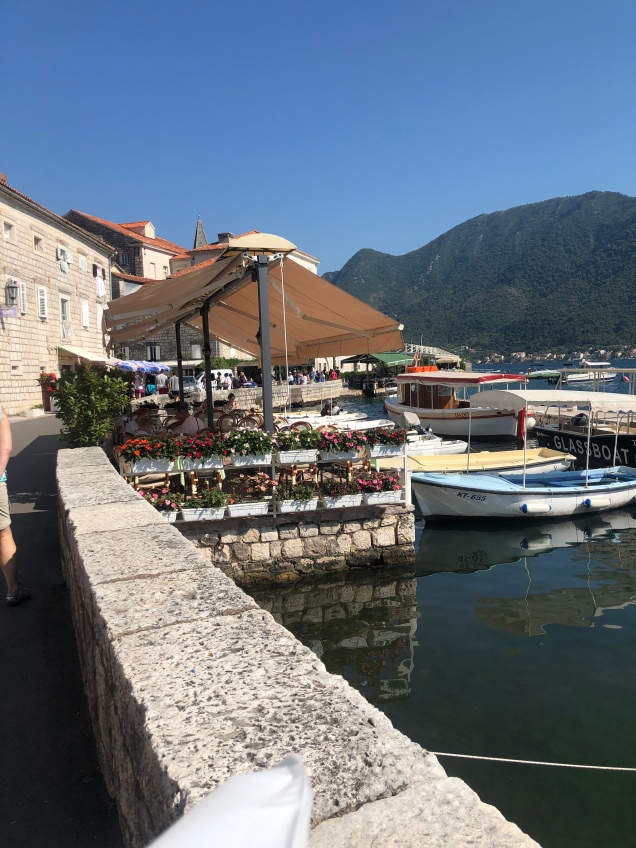 That night, our guide B had picked a very nice restaurant where we ate on the outdoor terrace – mussels with a tomato sauce was the specialty and the salad had real lettuce as opposed to cabbage! Or just tomatoes and cucumbers. 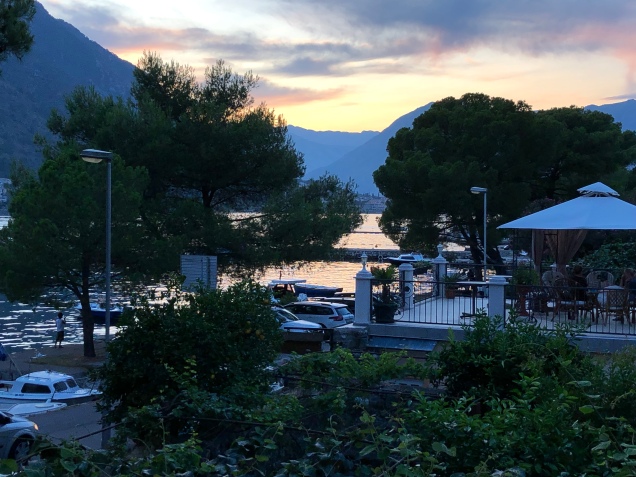 After dinner we walked down y the water. Lots of people, bars, and music, and J from Newcastle bought everyone a round of flavored raki. So strange that the last time it was offered was at 10 a.m. in a remote Albanian meadow.

On the final day of the “trek” – I use quotes on purpose – we journeyed via a large van to the border of Croatia, where we had quite a wait. We watched as one poor soul, a middle aged man in a fedora, had to get off a bus while everything in the vehicle was searched. Not clear whether they let him back on or not.

We bid farewell to our guide and travel companions at the Dubrovnik airport. We were now having to use kuna instead of euros. Made our way to a very unique Airbnb in Lapad Beach, and quickly found our way to a bar located in an actual cave at the Hotel More. The trek was over, but we still had four days in Dubrovnik to go. 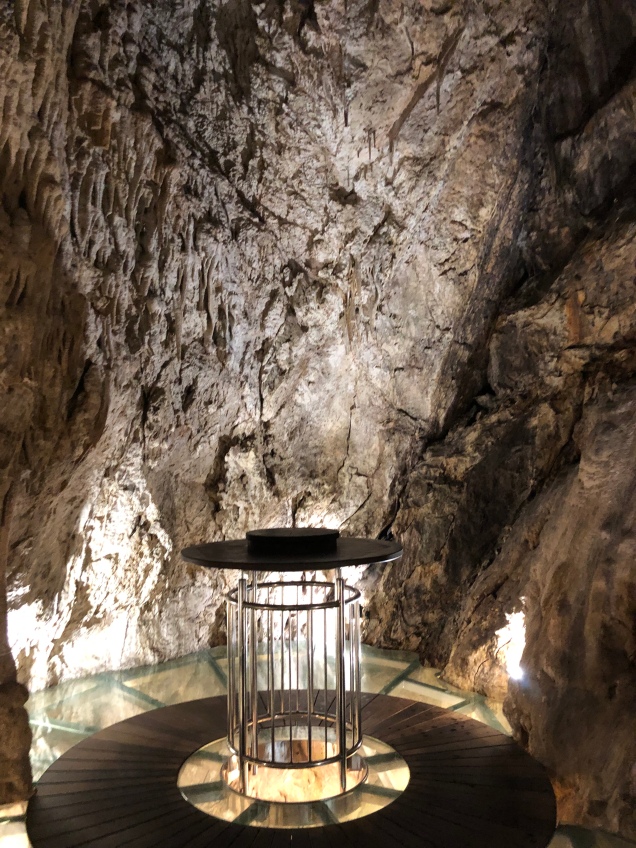 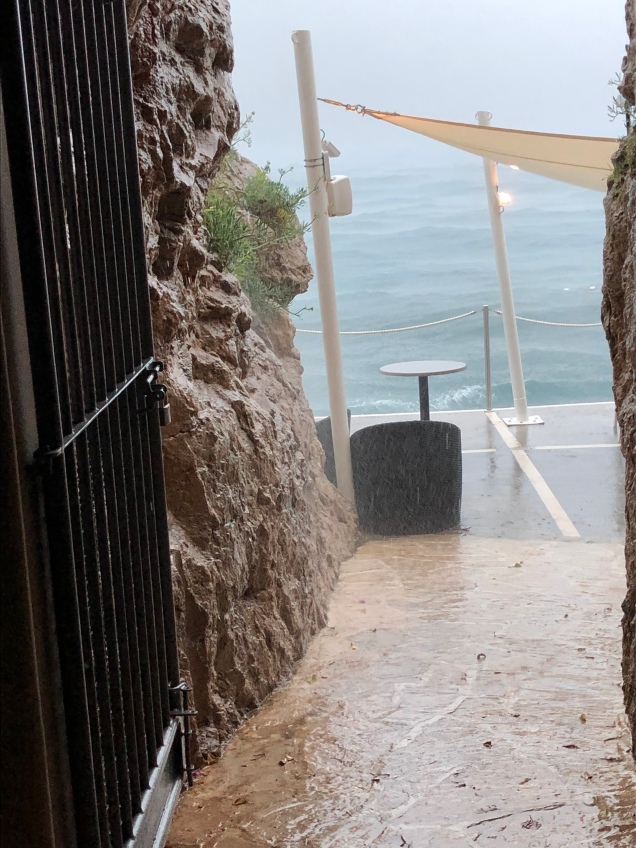