Somewhere between home in Orlando and an expedition to Stock Kangri in India in late June lies Richmond, Virginia. This past Christmas I decided I would only give gifts of experiences. I was tired of tendering never to be worn pieces.of jewelry or clothes. And gift cards just don’t cut it – in fact, I’ve begun to feel the recipient finds it an obligation to spend them! So when it came to my parents, Richmond, Virginia seemed to fit the bill. Not only was it only a couple of hours away from my North Carolina childhood home, but it was also the new home of my niece and her recently acquired husband (new initials to this blog, G and A).

After a too early morning flight to NC, we arrived only to leave shortly thereafter for a drive through the rural countryside just south of the border. We took a detour through Warrenton, a semi decaying but still attractive county seat. Large homes dating back to the 1700s, some done up and some in a state of half repair. Such a contrast to Florida where something from the 20s means the 1920s, not the 1820s. 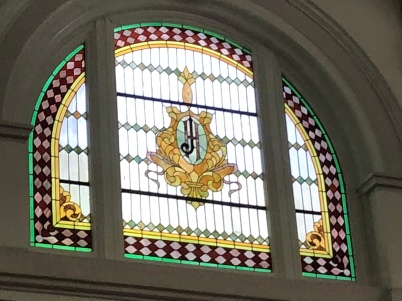 We had booked rooms at The Jefferson, the denizen of Richmond’s fine hotels. Built in the late 1890s, it embodies the Gilded Age through and through, something that became a theme for the weekend. One of my favorite parts is that they reputedly kept live alligators in the outside fountain and surrounding pool until the 1940s.

We had planned a big dinner that night, to include my side of the family as well as G, A, and A’s parents who lived near Richmond. As restaurants at The Jefferson book quickly I wasn’t surprised when my last minute attempt at a reservation for 9 failed. But I was bowled over when I received a call Thursday to say there had been a cancellation and on Friday night we were ushered into our own private room, with a fireplace no less.

Saturday we toured the Maymont, where A’s father, guide extraordinaire, arranged for us to visit before the masses arrived. It’s located in a 100 acre park, complete with an Italian garden and a huge Japanese garden with a 45 foot man made waterfall careening down toward the James River. The entire property was given to the City of Richmond in the 1920s after the deaths of its owners, Mr. and Mrs. Dooley. His father had started as a hatmaker from Ireland, while she was from an aristocratic southern plantation background.

The house is a frothy extravaganza of the 1890s-1910s. Ornate painted ceilings, silk on walls. The artwork consisted mainly of hand painted copies of famous European masterpieces, including, no less, the Mona Lisa. Clear delineation of male vs female colors. A remarkable bed in the shape of a swan. And oddly enough, as this was a house with no children, representations throughout of mothers with lost infants.

We also explored the cemetery, resting place of many presidents, including Monroe, whose birthday it happened to be. They have a beautiful view of the James, although as my father put it, it’s really wasted on them. 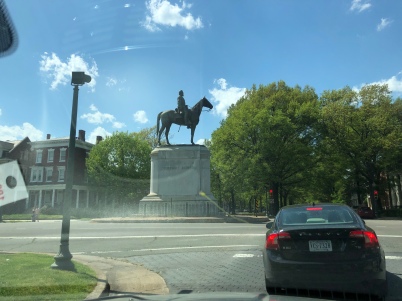 Monument Boulevard was a grim reminder. I’ve lived outside the true south for long enough that I’m unused to the imagery of confederate leaders marching in grandeur down the main street. I was relieved to find the monument to civil rights champion Maggie Walker on Broad Street near where we had dinner, as well as the statue of sports legend Arthur Ashe who haled from Richmond.

Sunday included a lovely breakfast in the main dining room of Lemaire, the restaurant at The Jefferson.  We followed that with a visit to the Virginia Museum of Fine Arts. It is a beautiful structure, with dramatic new additions and is surrounded by installations including Chuhuly’s “Red Reeds,” strands of red glass waving back and forth in a stream that runs past the museum.

It’s best known for its huge collection of Faberge items, including five eggs.  But there’s also an interesting 20th Century American collection, some beautiful tapestries, and many other rooms we didn’t even have a chance to visit. There was even a special exhibit of horses in Greecian art – perhaps in honor of the Derby?

My parents gave me a miniature “Faberge” egg pendant from the gift shop for my recent birthday. It will be a nice memento of a very nice weekend. Just another detour on the way to the summit.