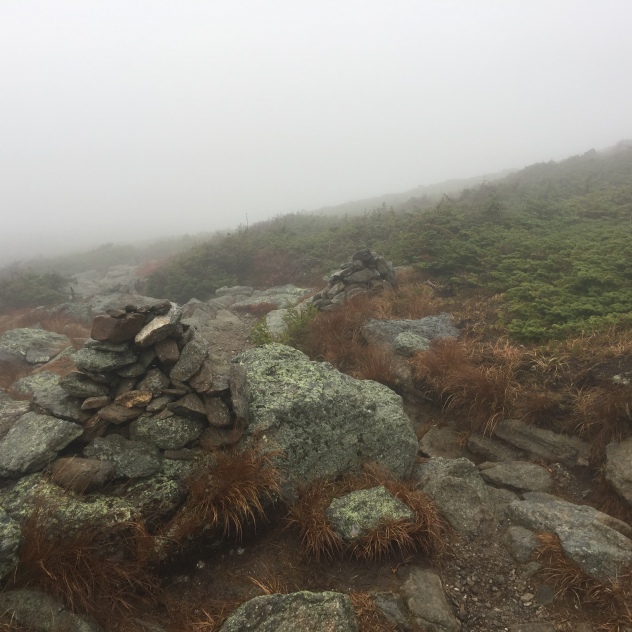 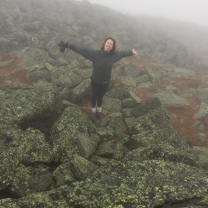 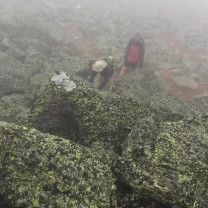 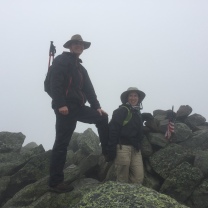 We’ve all been there. That one thing that keeps you powering on, even when your legs and your mind say this is a really dumb idea.

For both J and me (and maybe daughter A and her boyfriend N – although i haven’t asked them) the man in the mist on Mt. Jefferson in New Hampshire’s White Mountains did just that.

It had taken us forever to find the trailhead, which seemed to veer off of Google maps onto some narrow dirt road. And once there, the hike up the rocky, fog-laden trail was more uncomfortable than awe inspiring. The one overlook was a bleak landscape of grey fog, with none of the autumnal offerings we were hoping for.

We’d just encountered a miserable family of four – two parents, two kids – one of whom was scampering up the rocky cliffs like an energizer bunny while his older sister wept below and threatened mutiny if forced to go further.

We knew we were near the top, but we were still in the fog, The goal was starting to seem less and less significant. A was making serious queries about the rationale for further climbing.

But just at that point – looking for all the world like an older Jamie from Outlanders – a figure emerged through the mist. In a vaguely European accent he said it was no more than 20 minutes to the summit and he  had already come through the pass from the next mountain, which he summited already that morning. At that point, it was only the fact we’d all collectively seen him that reassured us we weren’t having individual delusions.

So we kept on climbing. It took us another 45, not 20, minutes but we got there. Sometimes it just takes a man in the mist. J claimed he was the spirit of adventure. Something most of us don’t get enough of in our lives.