When I started this blog last April, one of my first posts was entitled, “Where am I going and where have I been?” It was made up of exactly one photograph, as at that point I was still working my way through the intricacies of things like figuring out that a tag wasn’t a piece of paper with a price written on it (and was a far cry from a backyard game).

But a layover at the Miami airport this weekend provided the perfect graphic to answer that original question – at least for the next six months. As I looked at exotic destinations on the departures screen, many much more exciting than my 40 minute jaunt back to Orlando, I saw the below:

Airports are like that. You can smell the adventure waiting at the other end of a flight. I still find it remarkable that 100 plus people can be sent 30,000 feet high at over 500 mph. At an airport, you can sum up the where you are and where you want to be in one screen shot. 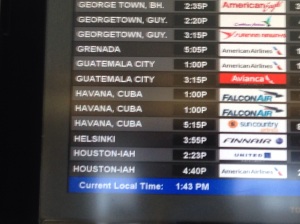 Another example – note the Havana, Cuba destination. I’m not sure I can recall ever before seeing Havana listed on a departure screen, much less right above Houston, Texas. What better way to show a shift in geo-political realities.

When I was growing up in the 1960s and 1970s, my family always arrived at the airport dressed in Sunday best and several hours before any scheduled departure. My brother and I regarded the waiting at the airport as much a part of the trip as the actual journey. I still remember the iconic TWA terminal at JFK, and how slick and modern Dulles Airport was, rising out of what was then a rural area outside of Washington. 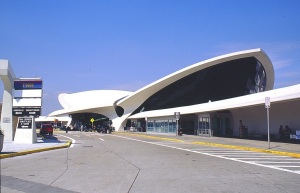 As the reality of the Cotopaxi and Chimborazo climbs sets in (right now I am at the slightly terrified stage), I just need to take it one step at a time. And after the training – the next step is going to be at an airport. And whatever happens, I know that when I set foot in one of those ultra modern terminals, it’s not a terminal in the sense of an end. Yes, it will evoke memories of where I’ve been – but even more excitement over where I’m going.

7 thoughts on “An Ode to Airports – Terminals Aren’t Terminal”