It’s 18 days or so until we depart for Nepal, and the effort of training while holding down an intense work schedule has wreaked havoc with my blog. But I’m determined to finish up writing about our now four year old adventures in Arizona – because next up is a new and exciting continent…a new frontier.

But back to Arizona and our journey through time. I had always had a vision of Sedona as a mystical place that would provide a portal into an alternate universe, the age of Aquarius, or some such place or time. I have never forgotten going to take a deposition in Scottsdale, very close to Sedona, where I managed to stay for less than 24 hours in order to return to my very young children while opposing counsel stayed an extra day so he could go hiking in Sedona. Ever since then I knew something had to be waiting  for me there.

So you can imagine my disappointment when we drove our trusty rental car down the main street to find a swarm of timeshares and souvenir shops, albeit ones selling crystals. Our small hotel was right on the Main Street, and supposedly featured a fireplace and mountain view – which it did but only if you looked out the back window over an alley.  No matter. We weren’t there for the town but the hiking.

I don’t recall the exact time frame –  I believe we arrived in early morning and went hiking that afternoon. A friendly and talkative chap at the tourist information center suggested a hike on the Bell Rock Trail around the Courthouse Butte. I checked the brochures and found that indeed it was supposed to travel through the energy vortexes for which Sedona is famous. Not quite sure what an energy vortex was, but it certainly seemed like something one should experience. Plus the idea of the Courthouse Butte seemed particularly appropriate for someone of  my vocation. The landscape stood in sharp contrast to the greens and blues and greys of the Grand Canyon. Here a uniform peach and tan dusty sheen bathed everything.

We were well into hiking mode and found it easy going except for one small matter – direction. After a couple of hours we realized we were hopelessly turned around. Whether it was the energy vortex or our own poor navigational skills I don’t know, but we went this way and that, with very little idea which way would bring us back to the trailhead and our car. The dusty trail looked pretty much the same everywhere and the Courthouse Butte itself – which originally looked like a square stone formation with four sides  – suddenly seemed to veer off into multiple random directions.

Ultimately we resorted to my iPhone for some navigational advice – after we had realized that the parking lot we saw in the distance wasn’t ours but one at the opposite end of the park area. 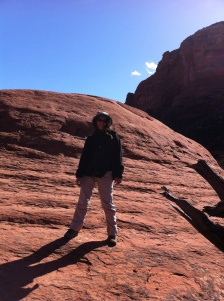 It couldn’t have been more different than the Canyon. There – there was a clear up, down, along the side and across. It was linear and direct. It was down into time and back out. But Sedona was a grand circle that spiraled and turned and tricked you into a trail here or there with any number of unexpected outcomes.

I wouldn’t have had one without the other.