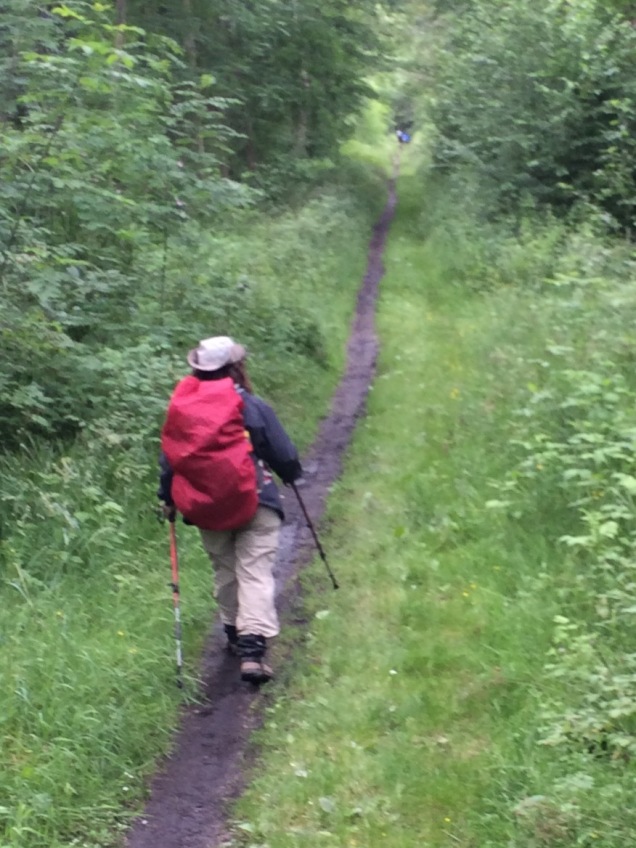 As a reminder, this summer’s adventure was a 70 mile hike along the Speyside Way in the Scottish Highlands, followed by a week in Scarborough on the North Yorkshire Coast. By day 3 of the hike we had sampled lots of scotch, eaten some very interesting food, and were getting in the groove of plus 13 mile days.

Day 3 was supposed to be easy, and it was mainly flat, even though the distances were longer than promised.  This is the point at which I became convinced that a Scottish mile is simply longer than an American one. But easier walking didn’t mean there weren’t other issues – this time of the directional variety.

After a nice breakfast at the Craigellachie Lodge – which included a “wee dram” of scotch in daughter A’s porridge – we got a late start and stopped for lunch only two miles later at a small town called Aberlour. By then my sunglasses had broken so we went to a chemist’s – where the only women’s sunglasses resided in a plastic box in the depths of the shop – which took the sales girl about ten minutes if not more to ferret out. Apparently there’s not much call for sunglasses in the Scottish Highlands. 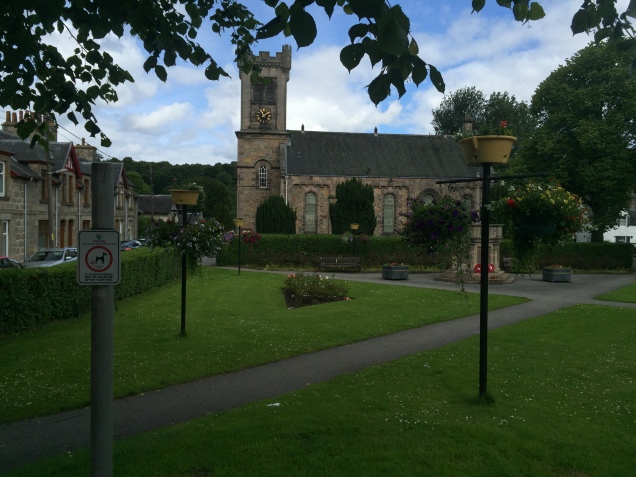 After dilly dallying around, it was time to make some miles. Scents distinguished day 3 from the others. They ranged from honeysuckle to breath of wild rose to anise to the yeast into sharp spirits smell of the distilleries. 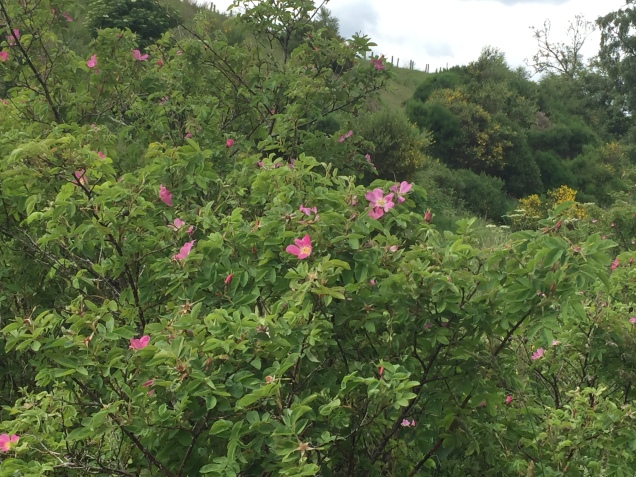 There were quite a few distilleries along the way, but tourist friendly most of them weren’t. These aren’t anything like the welcoming wineries you find throughout California and elsewhere. The distilleries are definitely a product of the Industrial Revolution and they maintain a stern factory like appearance – replete with lots of metal, brick, tubes….quaint, they aren’t.

By mid afternoon we’d spread out, with daughter S and boyfriend P well in the lead. That meant that when we arrived at Ballindalloch after many miles of hiking, expecting to find our next hotel immediately, they were the first to discover that there were simply a few holiday cottages by the trail, none of which was for us. Ever resourceful, they asked directions and finally realized it was another two miles, off the main trail and on what’s called the Tomintoul Spur. Needless to say, all this had to be conveyed back to us stragglers, which required much use of our free texting on our close to dying phones.

As we were all somewhat dubious about where we were going, it was a relief to find the Delnashaugh Hotel, a very nice small hotel just off the A 95. No, the last couple of mile weren’t particularly scenic – for much of them we clung to the side of a two lane highway hoping the speeding cars wouldn’t sideswipe us.

An added benefit of the hotel was a really excellent restaurant and a very nice bar. 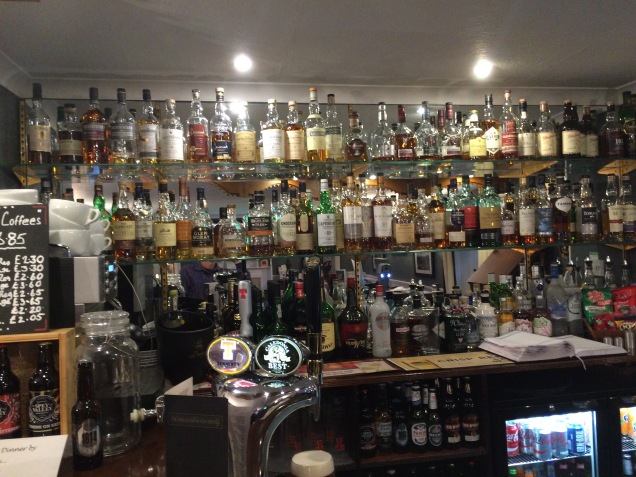 Day 4 involved the two mile trek back to the trail, and another thirteen miles (that is, a Scottish thirteen miles) to Grantown-on-Spey.  This was possibly the most beautiful scenery of the entire hike. Along the river and between fields, past a huge bull with a ring in his nose – separated from us by only two strings of barbed wire- baby calves and lambs, and deer.  S and P even met a large and friendly horse near a farm, following which they took a wrong turn down what turned out to be a driveway where they were pursued by a very small and yapping guard dog.  We then traversed forest and more fields into a magical hidden valley, complete with babbling brook and wild flowers. Lots of uphill today – even one section steep enough that steps had been kicked into the grassy incline. 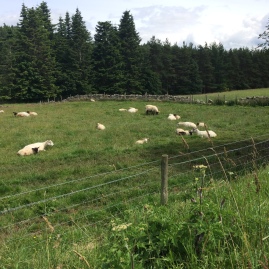 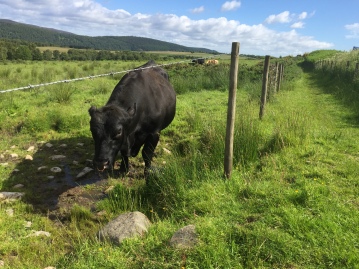 After a very nice lunch – at the edge of a forest with a view over the valley – more fields and forest. We must have gone through every variety of metal gate in existence. 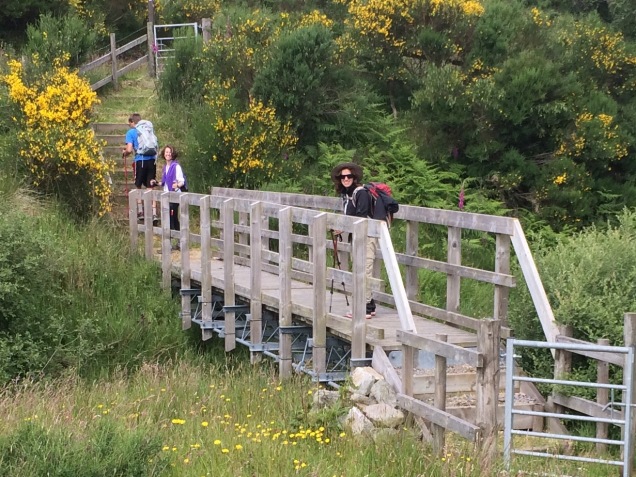 At Cromdale we crossed the river and collapsed in front of an old railway station – only to learn we had another 3-4 miles left. They seemed neverending – especially those through a forested park with very few directional signs right outside the town. But eventually we made it to Dunallan House, where we received a warm welcome from the owner, a native of Northern Ireland, who offered scotch and lots of stories. Incidentally, the interesting bridge below turned out to be another of our wrong turns! 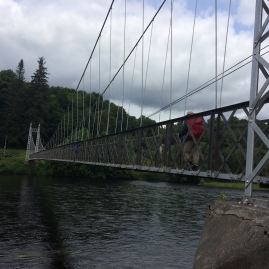 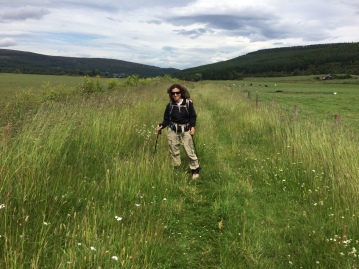 One thought on “To Ballindalloch and Beyond – Hiking the Speyside Way”