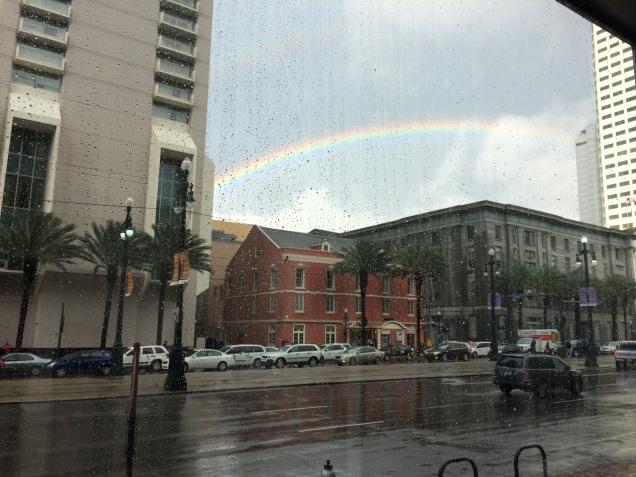 At least I got up and ran three miles up St. Charles Street this Sunday morning. That’s the least I could do after indulging in the highs and the lows of a New Orleans weekend. In fact, this post needs a trigger alert. We will start with pathos, scale the heights of a couple of gourmet restaurants and fabulous music, and finish with some gore and sonic feedback. So be forewarned.

First, the pathos.  I had originally planned for this post to memorialize our Westie, Malcolm, who crossed the rainbow bridge on Maunday Thursday, but that loss is still a bit too fresh. Plus, I think there’s  a connection there to our July Scottish Highlands hike, so best to wait.

And anyway, the temptation to write about New Orleans, one of my favorite cities, is simply too great.  An annual conference that husband J attends is frequently held in New Orleans, which provides us with a good excuse for a weekend in the city and a much needed get away from life and work in Orlando. It’s always good to trade one swamp for another.

I arrived on Friday afternoon, having flown through a massive storm moving over the Gulf. It was the sort of bumpiness where the passengers let out collective oohs as the plane made several unexpected dives. I’m a good flyer, but it was a relief when the plane finally landed – despite the torrential rain. Daughter S and boyfriend P picked me up.  S has now been in NOLA for five years, and her car is showing the signs. How does the entire inside of a passenger door become detached from the exterior?  Once you’ve experienced New Orleans potholes, the answer is a little clearer.

We gave up on any idea of going to the hotel first, and instead went straight to Bayona, an incredible restaurant in the French Quarter, where we met up with J and a couple of his work colleagues. We were seated in the upper room, right under the eaves – I heard it referred to as the wine cellar but it was really more of a wine attic. Just before dinner the rain slowed and a rainbow appeared – maybe Malcolm was telling us all to have a good time.  Bayona involved sweetbreads (cooked with mushrooms and potatoes), quail, rabbit stuffed with boudin sausage, beets and goat cheese salad, just to name some of the dishes. 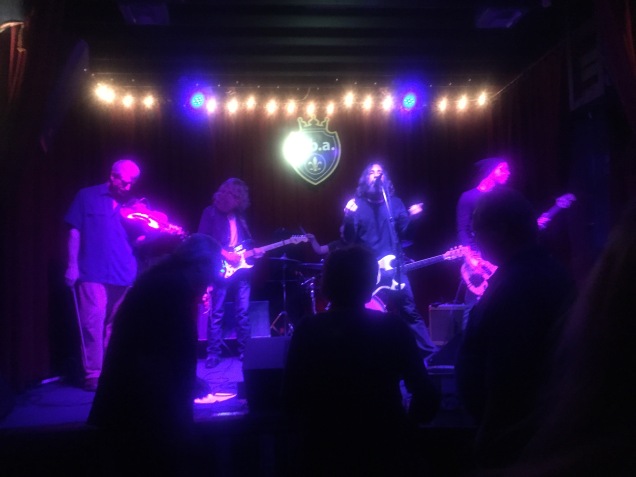 We had planned to go to hear Shovels and Rope afterwards in City Park but needless to say, the rain caused it to cancel. Instead we ended up on Frenchmen Street to hear The Iguanas at D.B.A.  A fairly large music venue, the chalkboard listed an entire selection of Speyside scotches.  But I stuck with double IPA. I really liked the opening band also, even though S was put off by the fact they played with their hair covering their faces. The Iguanas are a roots band that mixes R & B with Mexican rock, which makes for a great dance band. Their latest album  is called Juarez.

After a late night, Saturday was off to a slow start, at least for me. J had to go present at the conference and I found myself at the Starbucks on Canal. What a place for people watching. I was so intrigued by the seemingly homeless skinny ponytailed guy sitting next to me – who then pulled out his iPhone 6 while reading a poem off a crumpled piece of paper – that it was all I could do not to get up and follow him afterwards just to see where he went next.  And I also enjoyed the ongoing conversation that one dreadlocked guy was having with himself as he carefully constructed a bracelet made with shells, neatly clipping the loose threads with scissors as he knotted the shells in. 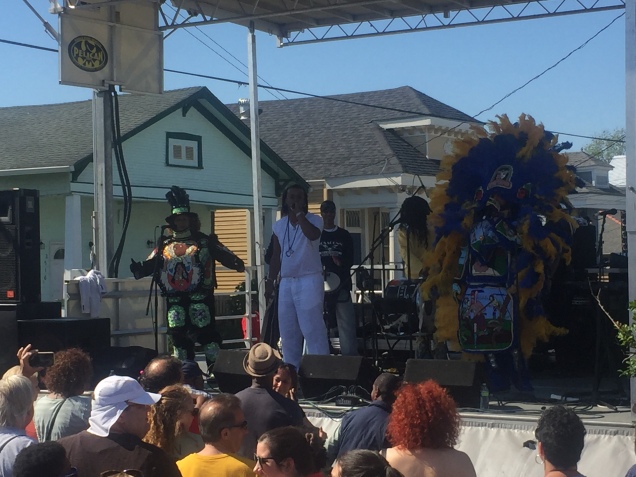 We finally met up with S and spent some time at the Freret Street Festival. It was a huge event with two stages. Sexual Thunder on one and the Wild Magnolias on the other. The Wild Magnolias are one of the Mardi Gras Indian tribes – a chilly morning had turned into a beautifully warm spring day and in full costume they had to be burning up. Lots of hipsters and dogs and I’m pretty sure we saw Alex Ebert of one of my favorite bands, Edward Sharpe and the Magnetic Zeroes. 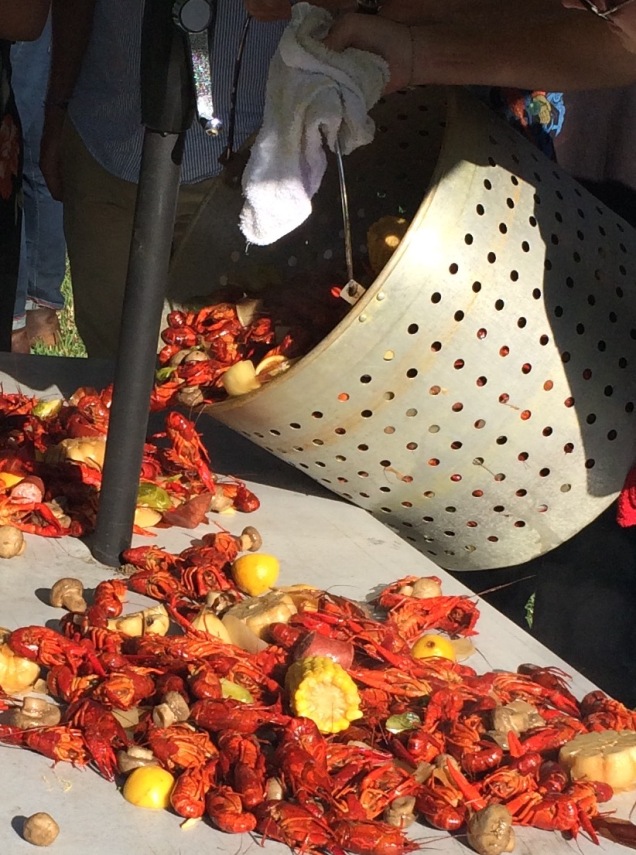 P’s brother was having a birthday crawfish boil that afternoon. P had spent the day in the hot sun trying to get a kettle of water the size of a laundry tub to a boil.  Have you ever seen over 120 pounds of squirming crawfish? But once they’re cooked with spices and corn and mushrooms and potatoes they take on a gourmet like quality.  At the same time, they are certainly the ultimate finger food.

We left P toiling away at the crawfish boil while we went off with S and a couple of her friends to an early dinner at Coquette on Magazine. P’s father had told us it used to be an auto parts store, and I’m pretty sure the pressed tin ceiling had some grease marks on it.  Yet another amazing meal – halibut with English peas and mint, red snapper, and more quail. 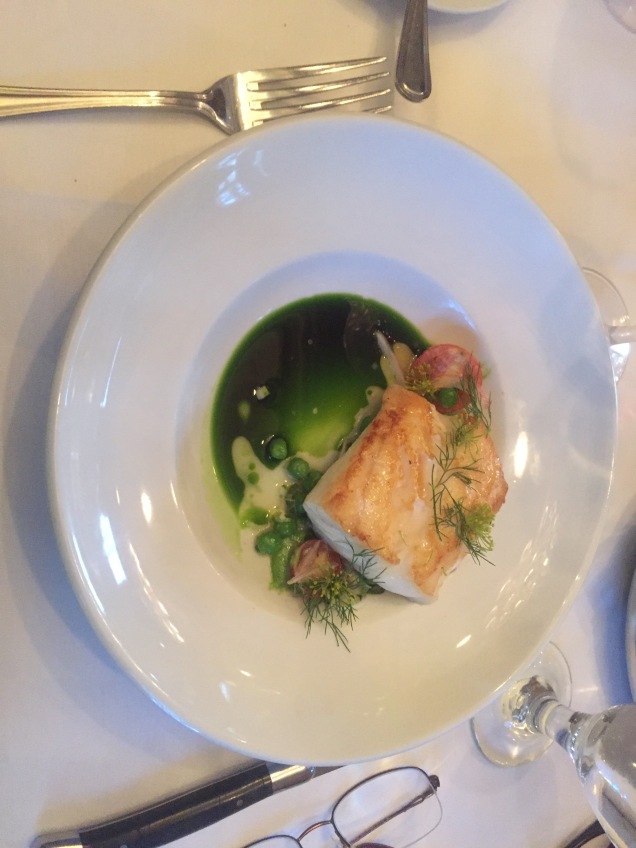 Following a brief stopover at S’s apartment we met up again with P and the evening took on a somewhat darker, but equally New Orleans, turn. We had decided to go to Howlin’ Wolf to hear a band S and her friends knew…needless to say, another group was performing when we arrived, playing what I can only describe as bad 1980s grunge with a little bit of Sonic Youth thrown in. They ended their set with a feedback riff that caused a collective groan of pain among the listeners (or at least those at our table).

In the meantime, unbeknownst to us at the time, P had managed to slice his finger open as part of his crawfish cooking activities, and had arrived at the bar with a self-made bandage of gauze that bore a stunning resemblance to a roll of toilet paper an inch thick covering his wound. After daughter S realized that either the depth of the wound or the effect of the music on it seemed to have caused it to bleed even more profusely, the night came to a screeching halt as medical care was sought.

But all’s well that ends well, and by the time we all rendezvoused  again this morning P seemed to still possess the injured finger, adorned with a much more professional looking bandage. 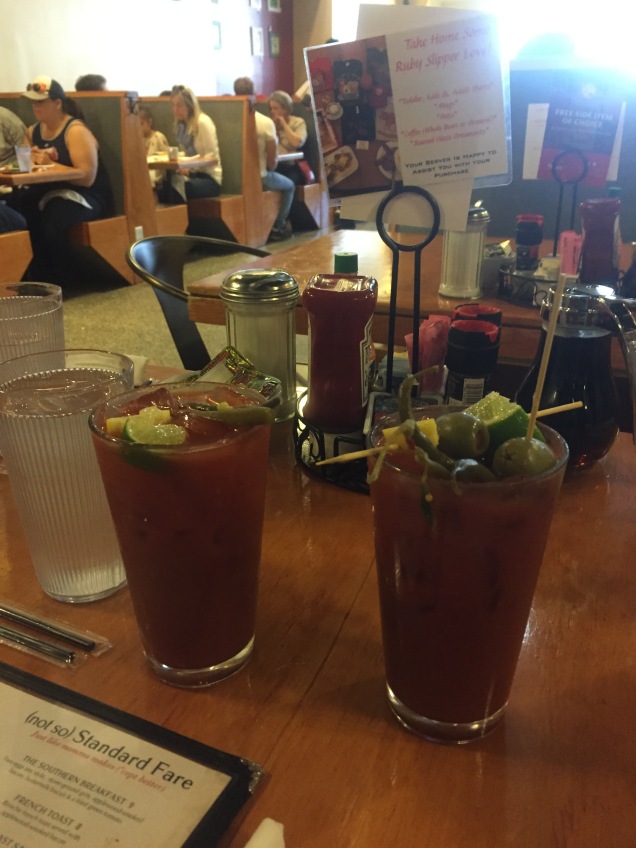 We closed out the morning and our trip to NOLA with breakfast and Bloody Marys at the Ruby Slipper. The drink seemed more than appropriate. And the plane flight back to Orlando was as smooth as jazz. 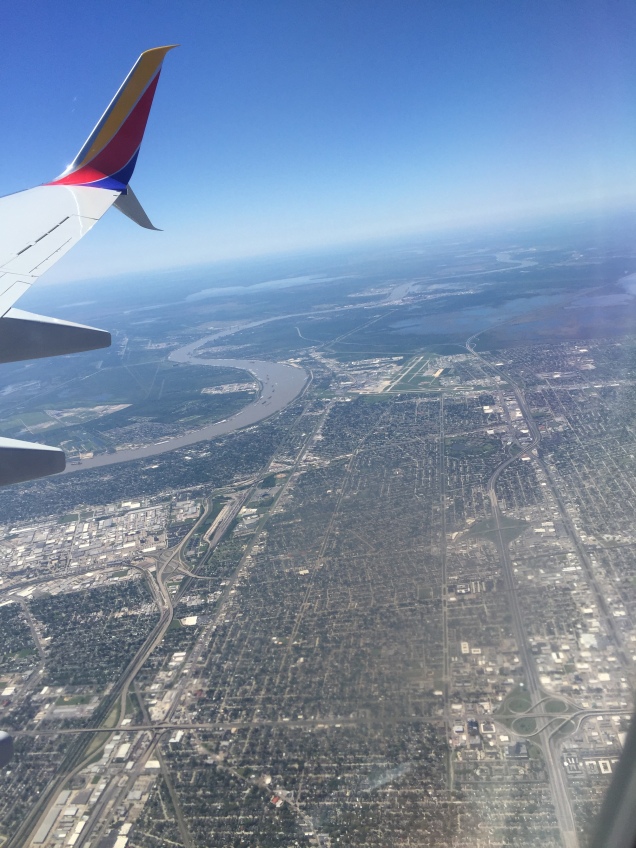