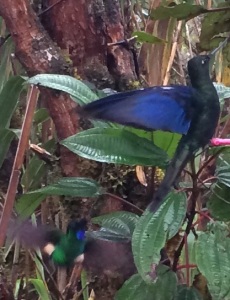 We returned from Cayambe on a Monday, with one day left to eke out every last remaining bit of our Ecuador experience before we returned to hot, humid and flat Florida. Of all the various options Ossy offered, a hike up into the cloud forest in the Pichincha range, into the Yanacocha Reserve, had the most appeal. Plus, he promised hummingbirds.

Now, I’ve had a hummingbird feeder for years. I’ve heard that Florida too has hummingbirds – but each time I spy such a potential winged creature, it turns out to be one of Florida’s special species of gigantic, winged bugs. Of course, the fact I have never bothered to put hummingbird food in the feeder probably doesn’t help.

So off we took, me, husband J, Ossy, and his wife. One fact I hadn’t realized before we left the U.S. was that our trip coincided with Pope Francis’s trip to Ecuador – and specifically Quito. Multiple roads were closed and police were everywhere.

On the way out of Quito we turned on the car radio and heard the Pope saying mass as we looked down on the crowd, half a million strong, in Quito’s Bicentennial Park. A little surreal.

The sunny weather we’d brought from Florida had definitely turned and there was a steady downpour as we drove the winding roads up to the trailhead. Once we arrived at Yanacocha we all donned raingear, and I was profoundly greatful for my absolutely waterproof wind jacket (a Marmot that dates back to 2011) and pants (also Marmlot).

After a mile or so straight uphill through the paramo – the Ecuadorian highlands, we encountered our first swarm of hummingbirds. And I use the word swarm intentionally. There were so many of them darting back and forth to feeders that you could hear their wings. They shot past our heads as if catapulted from some sort of slingshot.

Not only were there small hummingbirds, but we saw several (I think) Great Sapphirewings, one of the largest hummingbirds, about the size of a cardinal, native to Ecuador. We also saw one hummingbird with a needle like beak almost as long as his body.

After we hiked through hummingbird central, we turned a corner – and there, growing on the side, was a fully blooming orchid, exactly (well, bigger and healthier) like one I have at home. 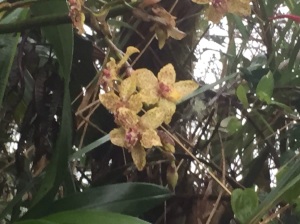 Even though it was still pouring, we ventured up the steeper section of trail as it didn’t seem too slippery. Of course, nothing seems slippery after a glacier. Nonetheless, by this point it had started to hail, and chunks of ice were accumulating and forming small banks of snow.  Ossy could have used a machete as there was a fair amount of trail breaking involved as moved further into the dense jungle of cloud forest. Flowers were everywhere, purple lupines, flame colored trumpets, white daisies growing close to the ground, all framed against a canopy of outsized leaves.

We finally reached a turnoff that would have taken us down a steep section to circle back to where we’d started – but that path did seem very muddy and by then we were all pretty well soaked. So we opted for what looked like a wider trail, despite the fact no one present had ever gone on it before.  The trail exited the cloud forest and took us back into the highlands – where we continued to climb up and up and up – even though it really seemed we should be going down and down and down. There were ultimately some long switchbacks, and we passed a few people working on the roof of a tumbled down structure of some sort, so we knew that at some point we should rejoin civilization.

Just after that, we suddenly realized we were walking across a field that was surrounded by a barbed wire fence – we were apparently on the wrong side of it. After we scrambled under the barbed wire, we looked back to see a large keep out sign barricading the area we’d been blithely strolling across.

But, our faith in Ossy’s mountain guide instincts was justified. Within another mile of so we hooked up with the “main” road and ended up exiting just a little below the spot we’d parked the car.

It was still raining, and we could all squeeze puddles of water out of everything we had on. J had on his customary too many layers of shirts and was able to lend Ossy one for the drive back. Apparently it’s illegal to drive without a shirt on in Ecuador. And besides, the Pope was there so I suppose it would have been unseemly in any event.

We made a quick pit stop back at the Hacienda Rumiloma to change – and dry off. The next order of business was a trip down into Quito for Chinese food – hot and sour soup never sounded so good. The Pope’s presence and road closings seemed to have resulted in an eerily quiet city, and we were able to park directly in front of the restaurant.

Hummingbirds, orchids, Chinese food, the Pope, and crawling under barbed wire. What better ribbon for wrapping our four Ecuadorean mountains in eight days?