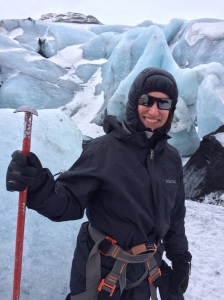 Day 3 of our Travel With Friends Trip was to be the Iceland version of a summit. We had peeled off from the more typical tourist sightseeing regime and made our way to Sólheimajökull, an outlet glacier of Mýrdalsjökull, which is Iceland’s fourth-largest glacier. It offered the opportunity to don crampons and climb on ice for a couple of hours. And at least J and I could regard it as some sort of training for our upcoming trip to Cotopaxi and Chimborazo (only three months from now!).  Because of our out of the way location at the Efstidalur Farmhotel, we were a considerable distance away, and had to hit the road bright and early for our 10 am rendezvous with the guide.

The theme of “the weather gets worse” continued. After surviving the narrow snowed over road on which the hotel was located, we ended up on a mountain pass. All we could see was a line of yellow tipped stakes outlining the contours of the road, and it was only on the way back we realized how close we were to the ocean. We finally turned off onto what was described on our map as a 3 km road that could take 20 minutes to travel. It was dirt and lava rocks, pocked with huge ruts. Eventually we reached the end, in howling wind and hail – only to find the long promised cafe where we were to meet the guide was closed and there was no other sign of human existence. In our excitement of getting there and maybe finding a bathroom, we had all jumped out of the car without properly fastening ourselves up against the elements, and accordingly were drenched. There was no bathroom either.

Finally, another car pulled up and out with it our erstwhile guide from Icelandic Mountain Guides. From New Zealand, he bounced between Aconcagua, the Alps, the Cascades – all the best climbing. I’m not quite sure how Iceland fit in, but there he was. He assured us that although conditions were not good now (read “you will be blown off the face of the mountain”), he’d been watching the forecast and the weather should clear by 2 pm.

So with several hours to kill, we drove back along the rutted road to the village of Vik. Supposedly a quaint fishing village, on that cold icy day all we located was a collection of warehouses and small homes with barely any commercial establishments.  We did find one hotel with a cafe and a sign stating it opened at 11. We rang the bell and eventually the owner shuffled down. After I inquired if  they were open, he went back upstairs to check with the wife, and following an onslaught of Icelandic argument apparently between the two of them, grudgingly returned and opened the cafe. We ate greasy pizza while another few drenched lost souls staggered in, all of whose plans had also been laid waste by the weather. 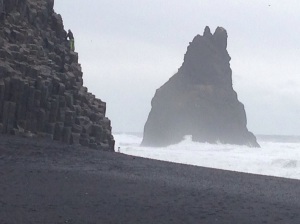 Eventually we departed Vik to head back to our long gravel road, but on the way we took a detour to Reynisfjara beach. A black sand beach with tremendous cliffs and rock formations – brutally windy and cold but stark and beautiful. It didn’t require much imagination to visualize Vikings landing there in their long boats. There was a cafe there with a huge glass window overlooking the crashing surf – next time we will know where to go. 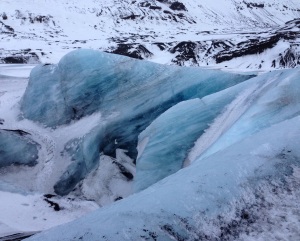 The glacier hike, although not particularly challenging, lived up to our expectations. As you ascend, the ice has become so compacted that in the winter it is a startling shade of clear blue, varying from periwinkle to deep turquoise. It’s set against black lava, some of which is even banded into the ice itself. There’s an ice tunnel just sturdy enough to crawl through – not dark as the light from the tunnel opening is refracted against the clear glass of the surrounding ice. A delicate tall ice arch had formed in one spot – by the time we were descending, it had fallen. Sadly, the glacier, like all glaciers worldwide it seems, is retreating. Where we were standing on rock near the cafe had been glacier just the year before.

It was finally time to bring our day to an end, and we had several hours of snowy driving to get back to our hotel. We had one more day left, and it was time to make plans.