The name of this blog isn’t FromSwamptoSummit for nothing. Occasionally, it’s important to come down from the summit or to allow yourself to be side tracked from the attempt to reach it, and enjoy a good wallow in a swamp. And what better place to wallow than New Orleans!

The husband and I have a long history with this city. When we got married in the spring of 1986, we planned to use the frequent flyer points I had garnered over a year of “fly outs” – as we then called the interview trips paid for by law firms to lure prospective summer associates – for our honeymoon. The only problem – all my points were with the now defunct New York Air. Besides Boston and New York, where we respectively resided, New York Air flew only to Detroit and New Orleans. The choice was not difficult.

Back in 1986, we stayed at the Hotel Villa Convento on Ursalines Street. In those pre Internet days we found it through a budget travel guide that I am sure we consulted at a bookstore without ever purchasing. The small family owned hotel has the dubious distinction of being across the street from a convent and is supposedly also the original house of sin made famous in the song, House of the Rising Sun. It had a certain moldy, faded glory, and we loved it. We’ve been back numerous times, including visits with children, parents and friends.

This trip – to visit daughter #2 – was assisted by the budget hotel vendor, HotWire, and the winner of this particular lottery was the Clarion Grand Boutique Hotel on St.Charles Street, the grand dame of all of New Orleans’ many boulevards. We knew we wanted to stay on St. Charles and this location is just about a mile above the Central Business District on the way uptown. We feared things might be off to an odd start when we checked in only to find a completely unknown credit card number associated with our reservation, together with a San Francisco address. After some detective work (oh, that legal training), we realized the address was that of HotWire itself – and who knows what the credit card was but we checked in anyway.

The daughter had made dinner reservations for us and several of her housemates at Martinique, a nice restaurant off Magazine Street with a pretty garden room where we were seated.  The menu was most notable for its desserts – in particular, chocolate rye cake with beet chutney. I was somewhat surprised when the husband – who hates beets – said he’d try a bite. He was equally surprised when what he thought was a raspberry topping turned out to be beets.

The food extravaganza continued on Saturday. At least we started the day with a four mile walk from the hotel up St. Charles Street to the daughter’s house on the far side of Tulane – one of our favorite walks anywhere.  Most cities have only a narrow strip of historic homes – New Orleans has blocks and blocks that run deep. The houses are often very close together, yet are huge. Many of them appear to still be single family residences. They are grand, with ornate columns and details, small front yards, and the dark, large front doors suggest a secret world closed off to all but those whose families hail from New Orleans’ early days.

We picked up sandwiches at the St. James Cheese Company, a small cafe selling gourmet – what else – cheese, and had a picnic lunch at Audubon Park, New Orleans’ answer to New York’s Central Park. We were barely off St. Charles Street, but our lunch companions were multiple types of ducks and turtles lazing in the sun.

Drove down to the French Quarter and poked around for a little bit. Bourbon Street as tacky as always, but the side streets as charming as I remember. Lots of Halloween ghouls peeking over the balconies, contemplating the various spooky characters below.

Dinner at GW Fin’s. I was amused to see that New Bedford sea scallops from Massachusetts were on the menu, together with gulf coast pompano. The daughter and husband both had “scalibit” – it’s a piece of halibut with scallops baked into the top of the fish and tastes as decadent as it sounds.

A trip to New Orleans wouldn’t be complete without a trip to the Sazarac Bar at the Roosevelt Hotel.  And following that a visit to the Marigny to hear music on Frenchmen Street. But who knew that there were two such streets in New Orleans – or one street that is disconnected in the middle….I knew something was wrong on our Google maps when we found ourselves on the interstate, ending up at a Frenchmen Street that dead ended into the city bus parking lot! All I can say is the white SUV in front of us had apparently made the same mistake since it made the same u-turn and trip back to the city.

Once we finally got to the right place we listened to some retro sounding jazz at the Apple Barrel and finished with blues by the Smokey Grenwell Band at Club Bamboula’s. 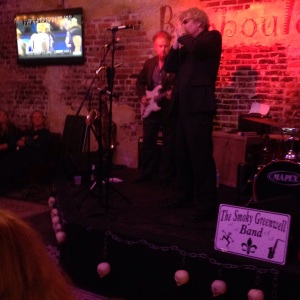 A final travel note – we ended our stay with a leisurely breakfast at Coulis and a drive through the Fly – also called Avenger Park. It’s the riverside part of Audubon Park where you can see the tugs pushing long lines of barges down the Mississippi. It’s a favorite hangout for the daughter.

And it was particularly leisurely because we thought our flight left at 2 pm. We got to the airport early – and fortunately so, because it turned out the 2 pm on my calendar was eastern time – and the plane was leaving at 1 pm Central! But New Orleans gave us that one extra hour to enjoy without worry – just another one of the gifts of slow time and ease  that the city offers. We all need to spend more time in the swamp.

2 thoughts on “New Orleans – Down in the Swamp”