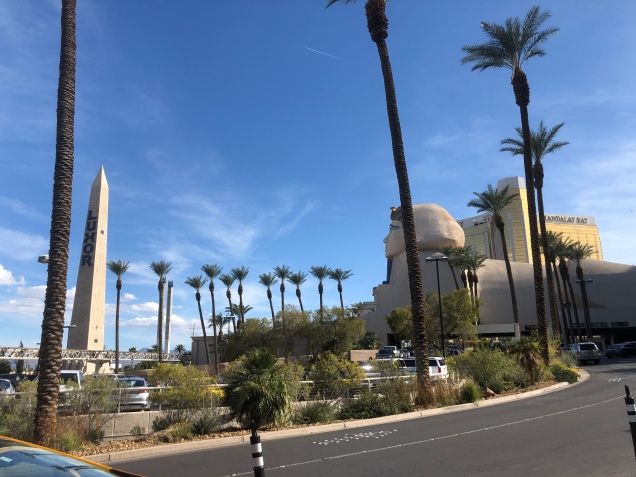 So the experiential content of my life has been increasing recently – along with an accompanying lack of time to memorialize said content. Let me take you back just a few weeks ago On a journey from the swamp to the desert…that is, to the brown sand, concrete neon oasis that is Las Vegas.

Now, what took me there, of course, was work. LV is a place I’ve not intentionally avoided but it just hasn’t ranked prominently on my radar as a place to aspire to go. In fact, when we went to the Grand Canyon way back when we went through Phoenix.

But there I was – my deposition having finished unexpectedly early and with an entire afternoon and early evening ahead of me before a 6 am flight back to the swamp. I was faced with a choice – take an Uber to the Red Rocks park which another Uber driver assured me was the nearby best place to hike (always take the recommendations of your Uber driver) or venture on an urban hike to see what the heck people really do in Las Vegas. I chose the latter.

So, I ubered from the new millennial style Tru by Hilton hotel (with multiple USB outlets for all your devices) to Mandalay Bay, which appeared to be the northern most edge of the “strip.” I realized, as I emerged from the Uber, that I’d forgotten my sunglasses and was absolutely blinded by the brilliant desert light that hovers over Las Vegas. So what can one do but head into the Luxor casino, next to Mandalay, and buy a pair of sunglasses at a what appears to be a 7-11 in the midst of a casino. I was there with multiple people buying wine in cans and airplane size minis of Crown Royal.

Anyway, sunglasses appropriately purchased, my black pants, tennis shoes and green silk blouse on, I ventured forth for my solo girls night out in LV.

I had a client, who many years ago did all the hard scaping for the Bellagio, and a friend who’d told me it was worth seeing – so that was my goal. I made it beyond Egypt, apparently crossed continents and oceans without realizing it, and found myself in New York, with a full skyline ahead of me. Empire State Building, Chrysler – all there. After wandering around for a bit in what looked like a mall food court I got back on the street- and discovered all the retail stores were below ground!

I’m of an age where I just felt I couldn’t go to the Bellagio wearing tennis shoes. So there was a Marshall’s ten feet down that I thought must have a better pair of shoes. Which they did. After a whopping expenditure of $24 (actually I had to talk the cashier down on the price because apparently I’d picked up the seconds) I made my way back up said stairs to surface level where I sat on the curb next to several homeless people and changed shoes. I spent the rest of the evening carting my belongings around in my Marshall’s bag. So on I went – checking out the King Arthur themed hotel – all the way to the Bellagio – surely this side of Eden.

It was actually pretty spectacular. All done up for spring with an amazing combination of fake and real feathers and flowers. I went to the bar in the main level that was featuring happy hour prices and appetizers, figuring I could certainly find food there. The hostess – asked if I’d like to sit at the bar — and said by the way I love your emerald green blouse. So I and my Marshall bag found a nice spot at the bar where I ordered some salad with some very retro name that totally escapes me but there were beets, cheese, and lots of lettuce.

On my left was a guy who drank nothing but was there, as he told the bartender, for the cheap happy hour prices. Bartender said – – are you local? He said yes. Professional. Bartender – Poker? He – yes.

On my right – a woman who’d been to LV many times – whose husband was off gambling while she hung out at the bar and would meet up with him later. From Wisconsin. 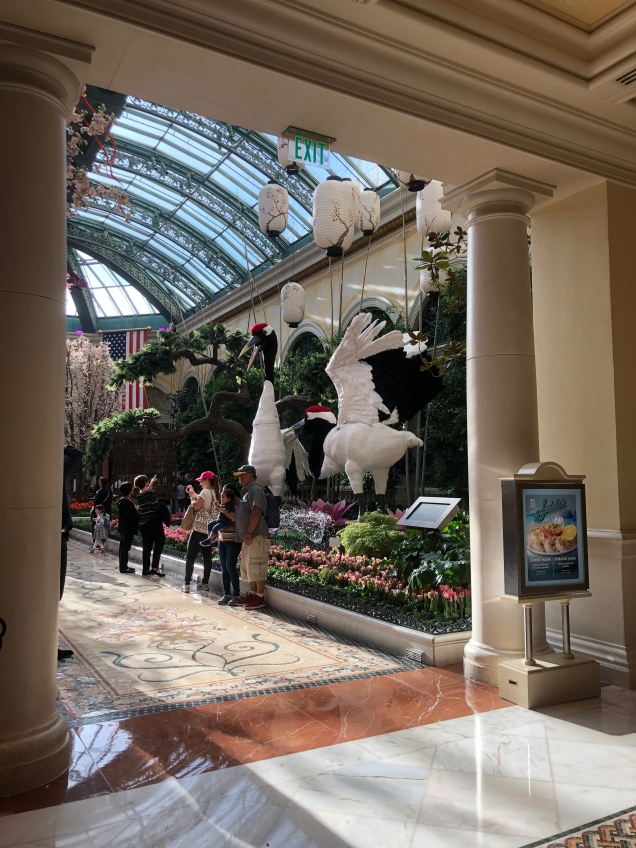 So after my scintillating dinner experience it was time to walk back to where I’d seen the Uber pick up spot near the Mandalay. (I didn’t realize there was another mile of the strip I hadn’t even ventured down).

That led to the exploration of the habitrail overpasses through Las Vegas. Loved the casino Aria giving nature aphorisms in the midst of the neon. Got really lost at that overpass. And back to King Arthur’s palace where I just started to photograph people’s shirts.

Awakened in time for my 6 am flight. I go back in three weeks. Think maybe it will be the red rocks hiking trail next time. 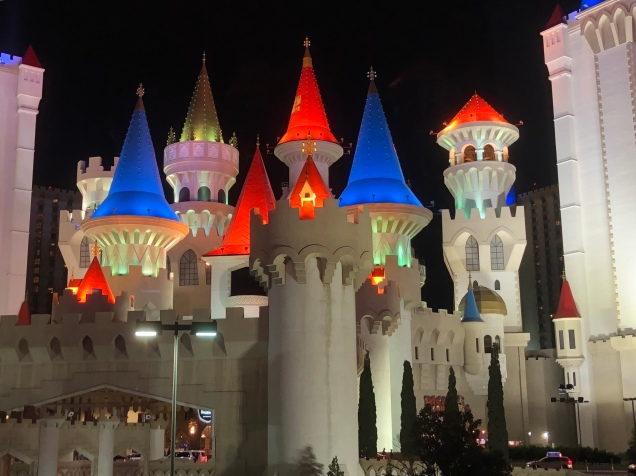 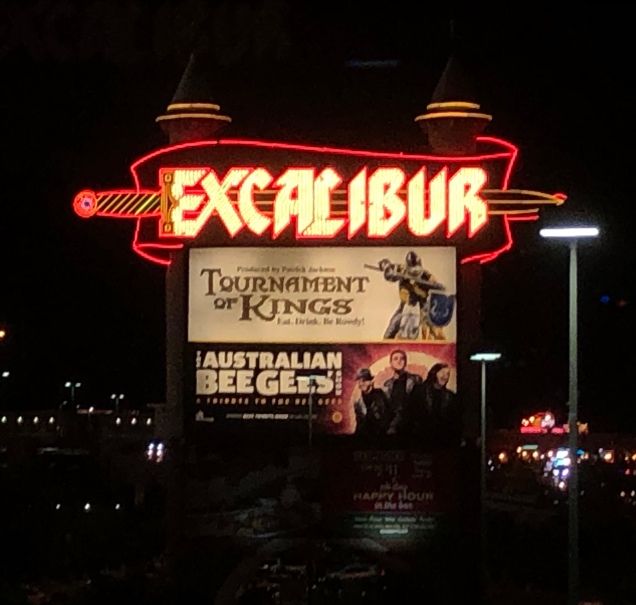