Our departure from Delhi was not until late evening, meaning that we had a full day of adventure ahead of us. S’s flight was even later than J’s and mine. So on the advice of the concierge at the Ashok Country House we decided the Red Fort was the appropriate destination. By now we had realized how little we really knew about the history of India so we were prepared for anything. But the Red Fort truly was like something out of the The Arabian Nights.

We took an Uber (talk about creating a continuity of experience in any culture…) along beautiful boulevards, interspersed with crumbling shopfronts and people camped in every little open space. After 40 minutes, we arrived in Old Delhi, facing a long and high red brick wall that seemed to go on forever – especially in the 102 degree F heat. Now we had to find the entrance, which we presumed was somewhere behind the numerous military checkpoints. There were very few Westerners, and seemed to be no Americans at all. I located one European looking man in a pastel shirt who vaguely looked as if he knew what he was doing. We followed him up to the ticket counter and through even more checkpoints into the Red Fort itself. Once again, men and women were separated into two queues, so I proceeded along in solitary splendor as J and S veered off in a different direction until we’d gone through metal detectors, pat downs, and bag checks.

The Red Fort was built in the 1600s by one of the Mogol sultans, and destroyed by the British. It’s now undergoing a major reconstruction. You enter through a large gate into an arcade filled with small shops selling everything from scarves to curios to jewelry. So overwhelming we didn’t even attempt to buy anything. You then arrive at the main campus, which I can only describe as Aladdin-like. A throne room for public audiences; a spectacular mosque with delicately inlaid red jeweled flowers on white marble. The whole area is about 2 kilometers in size.

After several hours recreating the world of the sultans in our mind’s eye, we were ready to fortify ourselves with a 21st century lunch. I’d read about a Mogol restaurant that dated back to 1913 that was supposedly run by the descendants of a chef to the sultans. We tried to walk there from the Red Fort, through reams of people, beggars, salesmen, and just occupants of the city. We eventually figured out Google Maps was taking us in circles, and I was still dealing with a swollen and numb foot – so we swallowed our adventurers’ pride and hailed a motorized rickshaw type thing. I showed the driver the address on my phone, and along we went though narrow streets only to be dropped off at what appeared to be a literal hole in the wall, but turned out to be a warren of interconnected restaurants. Yes, it was a little Alice in Wonderland-like. 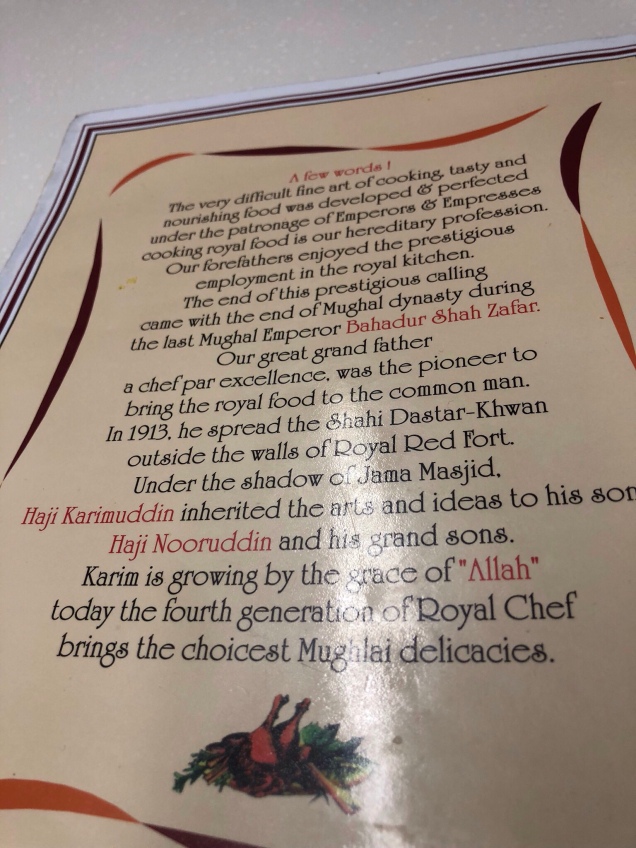 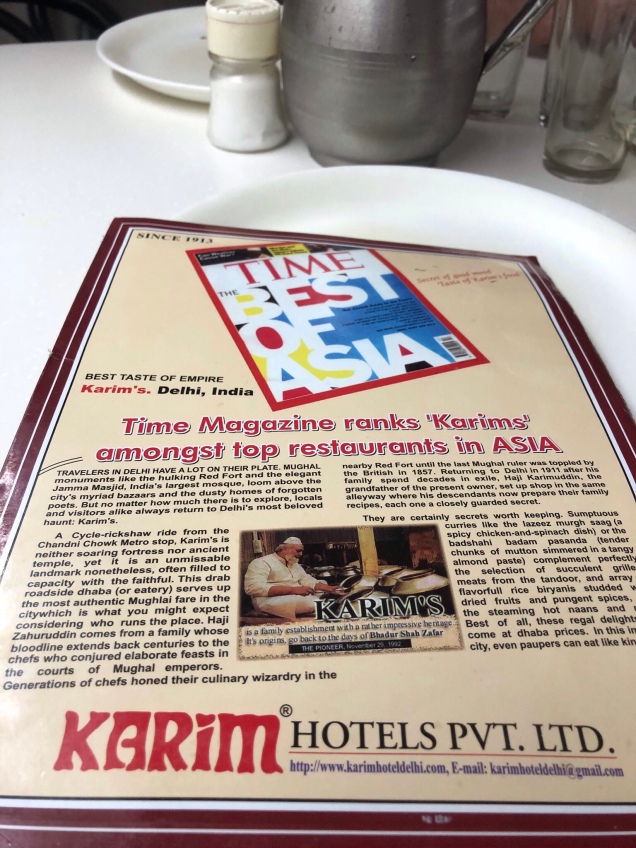 To call it informal was an understatement. There was a sink at the entryway for washing up; we were then ushered up a short flight of stairs to a small and blessedly air conditioned room with five tables. Once again – we were the only westerners. I had mutton Muglai – a stew that was remarkably hard to eat with only a spoon and nothing to cut with. Plus, I felt so filthy by then that eating with my hands didn’t seem like a good idea – nor was I convinced that washing up with Delhi water was going to assist with any standard of cleanliness. Nonetheless, we managed. J had a superb chicken tandoori and S roasted mutton. Really good rice and nan and I don’t think a Coke has ever tasted so good as it did on that hot day.

We were worried about getting back to the hotel in sufficient time to get our transfer to the airport especially given some of the challenges of getting around Delhi. We walked past a man carrying what was (at that point) a live rooster, spice shops, a live bird market – and miraculously were able to connect with our Uber driver.

S still had his hotel room for another night (it turned out his flight left at 2 am that night, not 2 pm the next day as he had thought!) so we were able to shower off some of the grime from the 100 degree day before heading off for our flight to Dubai and then onto Orlando.

We’d traveled up 20,000 feet by foot to get to the top of Stok Kangri. As our flight took off I looked out the window at the puffy clouds as we topped that height. Had I really climbed there, into that level of the stratosphere? I had–into that cotton, light, hard fought, rocky, grey and white, jagged, damp and dry, foot upon foot, part of the world. Usually you only see 20,000 feet from the window of a plane. But to reach that altitude on foot meant every inch had a special meaning. From the horses that carried our bags, their bells clanging as they looked toward their home villages, to the shrines with the yak skulls ashen in the hearths, to the rainbow colored prayer flags sending wishes into the winds….20,000 feet now evokes an infinite number of memories.