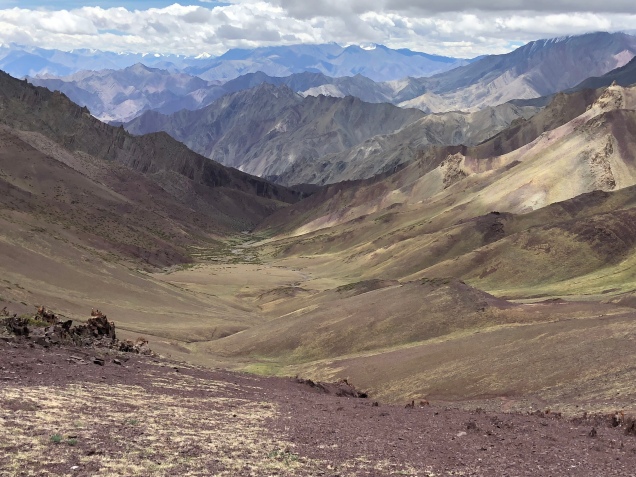 This series of blog posts starts in medias res – right in the middle.  Since it’s the trek itself that I’ve been training for – why not start there and circle around to the rest of the trip later? If that technique was good enough for Homer in the Odyssey, it’s good enough for me. I’m writing this during 2 hours of free Wi-Fi on Emirates somewhere over the North Atlantic, although it’s going to be uploaded later.

I could start with a rundown of current and various minor injuries from the trek, which range from multiple bruises to swollen numb feet – but instead I’ll start with June 29, a Friday and the first day of our trek. We were awakened about 4 am or so at the Hotel Mogol in Leh by a family that apparently felt everyone around them should also participate in their departure from Leh. I couldn’t help but think where they would fit in on the Wheel of Life we’d been studying at a monastery the day before.

Our group of ten started with a drive to the very large Thiksey Monastery. It’s perched on a hill and consists of many white and orange buildings. Monks and nuns in their ancient red robes come and go; odd contrasts between their garb and the vehicles they are driving. The temples date back to the 1500s; the oldest contains a very serene Buddha that glowed in the dark setting. Another more recent temple houses a huge Buddha of the future surrounded by colorful Tanka paintings – many monks and nuns paying their respects.

Back in the cars for a drive through the valley to our first camp. At first on paved roads; then a sharp right into an unpaved road through yet another valley. Rose/green stone mountain walls on either side reminded me of the striation in the Grand Canyon. Suddenly the road improved a bit and we turned into a meadow, separated into several areas by stones, with the brown/green/rose mountains surrounding us on all sides (Shang Sumdo, 12,467 feet). When the sun comes out, the mountains glisten, reflecting the tufts of green in the meadow and the high, pink flowering bushes that line the campsite.

The pack horses arrived with their three “horsemen” and wandered around the campsite, bells jangling like a carillon.

What is the set up, crew and tents, you may ask. There are two toilet tents, basically canvas walls surrounding dug out latrines (one with a commode perches over the hole); a kitchen tent, dining tent, and sleeping tents. The kitchen staff consists of a Nepalese father and his three sons who are learning the trade (the food was fantastic), 3 Sherpas (2 Nepalese including one who has climbed Everest 3 times, and 1 from Darjeeling). We have an extra Sherpa due to the calamities that had befallen our group before we even set out – but more on that later. That’s part of starting in medias res! Ages of our fellow trekkers range from 27 to 61.

After we established ourselves in our tents,we took a “gentle” acclimatization hike. It turned out to be an extremely steep climb up loose dirt and rock to 13,467 feet. Then we did a little bit extra at the end without packs. Feeling very good with acclimatization.

Tea and biscuits follow at 4, with dinner at 7:30, which is apparently early for India.

First nights in a tent are always hard and it’s remarkable how things go missing in such a small space. The night included a horse bell clanging (one horse had to wear a bell all night although they were removed from the others), and a braying wild donkey that practically walked into our tent. The next morning it tried J’s coffee when he left his cup sitting outside.

Tea and coffee are brought to the tents at 6:30 am, warm water at 6:50 and breakfast is at 7:30. I managed to spill my tea in the tent immediately and was punished by having to travel with two wet towels for the next few days.

The trek on our first real day started on a road with a gradual rise. We passed an Army training camp where we saw a class being taught – it is very clear we are near disputed borders and there’s a strong military presence. We walked by the little village of Chang, a striking white monastery up on a hillside, fields of green barley and yellow mustard. Then we hit what I affectionately refer to as a river bed death march, although it’s technically glacial moraine where you have to pick your way over rocks of all varying shapes, sizes, and colors. Little did I know how well I would get to know glacial moraine on this trip! 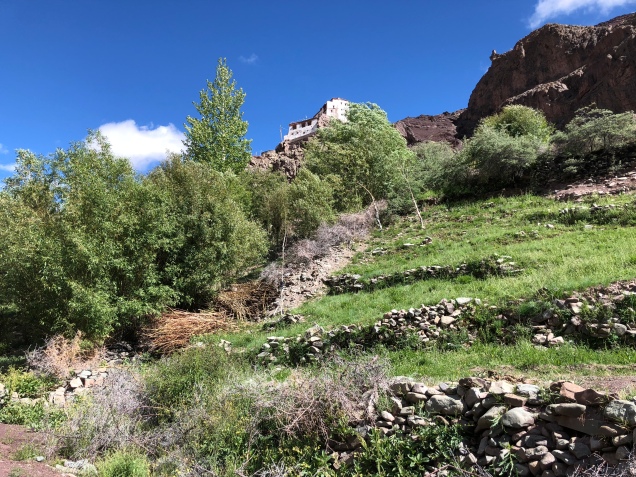 We eventually made our way to a lunch spot – an enclosed stone area with a shrine in the middle of it, ornamented with what looked like burned yak skulls. Our guide, R, immediately lit a butter lamp. We are completely alone on this trek. We’ve seen no one but locals (and very few of them).

After a long lunch to wait for the horses to catch up and go on ahead of us, we were back on the trail, steeper, and you could start to feel more altitude. Suddenly we were at a meadow that was to be our next campsite, Shang Phu (14,380 feet). There was a shepherd’s hut where some small items were sold, but nothing else but  incredible views of layers of mountains, sun glinting off stone.