It may be seven months off, but when you’re headed towards the ripe old age of 57, and there is a  20,000 foot mountain  called Stok Kangri beckoning you, you have to respond to its call with a training regime. Unfortunately I was just gearing up my program when all hell broke loose at work, which has wreaked havoc with my workout plans, but I’m doing my best.

One place J and I re-visited a couple of weekends ago was our old favorite, the Cady Way Trail. We started to hike it back in 2011 when we were preparing for Kilimanjaro and I’ve been meaning to write about it since day 1 of this blog. In fact, there’s still a partially written post in the drafts folder.

Over the last six years we’ve watched this urban/suburban trail change – almost a microcosm of the larger world around it. Case in point – there was a little rundown house we always used to look at with a slight sense of incredulity. The windows were cracked, the washer and dryer resided in a strange outdoor closet, and my personal favorite was the trough for feeding the owners’ collection of pit bulls. Six years later – the house was gutted, windows replaced, the outdoor washer and dryer vanished, and landscaping has substituted for  the dog feeding trough.

Cady Way is long and hot and winds between the backs of houses, past a little used golf course (or so it seems), by a high school and culminates in a high pedestrian bridge that passes over one of Orlando’s long wide boulevards, studded on either side with Mexican restaurants and car lots. Oh – at the far end of the trail there is a beautiful little memorial area to remind hikers of a couple of brutal murders that occurred there a few years back.

Aside from the normal prurient interest in getting to see everyone’s backyards abutting the trail – the most interesting place is an odd building that was part of the old Naval Training Center. J and I are convinced it’s a listening center for the military – that location that’s monitoring cell phone traffic. All we know is there are never any people present, there’s a loud hum, there’s an odd asphalt track that he runs around a field for no apparent reason, lots of gas canisters and double barbed wire fences. There’s no telling what it really is – but it certainly lends itself to speculation on what can otherwise be a brutally boring hike. (In face, we’ve never photographed it for fear of being observed!) 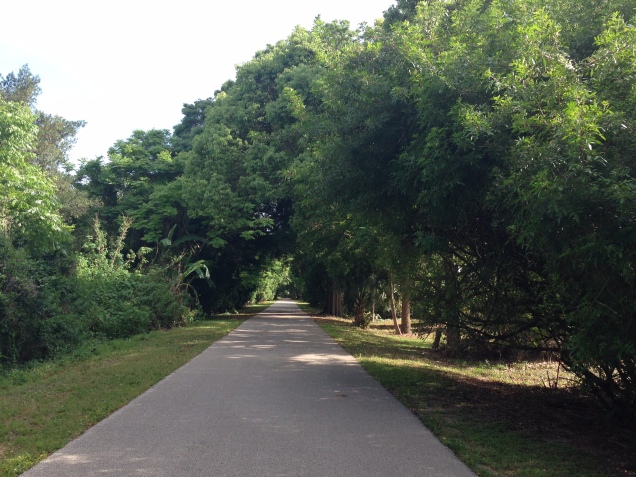 Cady Way has no spectacular sites, no vistas, and only a few spots that even qualify as “natural.” But it’s long (10 plus miles round trip), it’s really hot (and hence meets my theory about stressing your body for high altitude), and the little changes that you see year by year create just enough interest. By now it’s like an old friend that’s giving an “atta girl” to help me get up that mountain.

2 thoughts on “Back on the Trail – Eyes toward Stok Kangri”