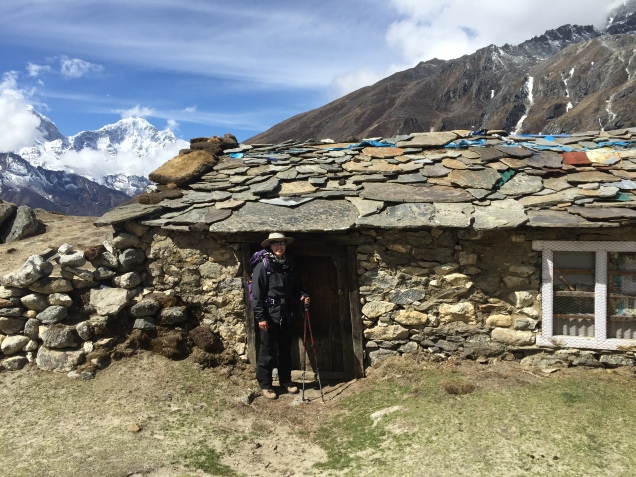 It had now been eight days since we left Orlando, and we were finally ready for our trek to Lobuche at 16,180 feet.  This took us well above the tree line into a very barren area, through valleys occupied only by grazing yaks (who seem able to eat anything), and what can only be described as a stone hobbit house for the yak herders. Everest peeked through clouds and mountains in the distance.

We had lunch at a tea house on the other side of a slightly less scary swinging bridge, which was followed by a very long uphill, culminating in the many memorials placed in honor of those who have died on Everest. They reminded me in some grim way of the above ground tombs you see tthroughout New Orleans.

From there, it was more up and down and finally into Lobuche. We were by now completely out of village culture and into trekking culture. We kept running into the same people everywhere – the guys from India, the nurses from Florida who were working in Nepal, the Australian couple. And I think I forgot to mention that he who hogged my seat on the flight to Katmandu ended up staying across the hall from me in Dingboche!

The Oxygen Altitude Hotel was our next residence and one of the worst bathroom experiences yet – even though by then we had adapted to the fact that the existence of an ostensibly normal looking toilet meant nothing about flushing. Instead, flushing was correlated to the barrel of water with the plastic jug floating on top that was placed next to the toilet – and usually in just a spot to make it hard to close the door. But when you realize how difficult it was just to get that water there it becomes much more understandable. At that height – despite the surrounding glaciers – there’s no easy water source. There’s also no source for fuel. Yak dung fed the one stove in the dining room – and it was the only source of heat.

After we arrived,  J and I went with our guide for a short acclimatization hike up the nearby ridge to look at the Kumbo Icefall. I forgot my poles and it was dicy on the way up and started to snow on the way down. The Icefall itself looks like someone took a big bag of snow covered ice cubes and dumped them down a slide.

None of us slept well that first night at over 16,000 — and the next day was to be the trek to Gorak Shep and EBC. We started at a reasonable hour but the team wasn’t moving very fast – it’s a lot harder to get oxygen at that altitude – and we ended up going first to Gorak Shep, checked into our tea house and had lunch. This was a much smaller lodging – our rooms were up three flights of completely uneven stairs – some almost 20 inches high – and I found getting to the room as hard as the trek itself. To add insult to injury, due to the water issues the inside bathrooms were barricaded off during the day!

The trek to EBC – theoretically the talisman of the trip – is challenging. You hike alongside the glacier – mostly stone-covered but with deep divots through which you can see tens of feet of blue ice and frozen lakes.  Lots of rocks to pick your way between and finally you reach what feels like a natural levee between two valleys that you hike along. 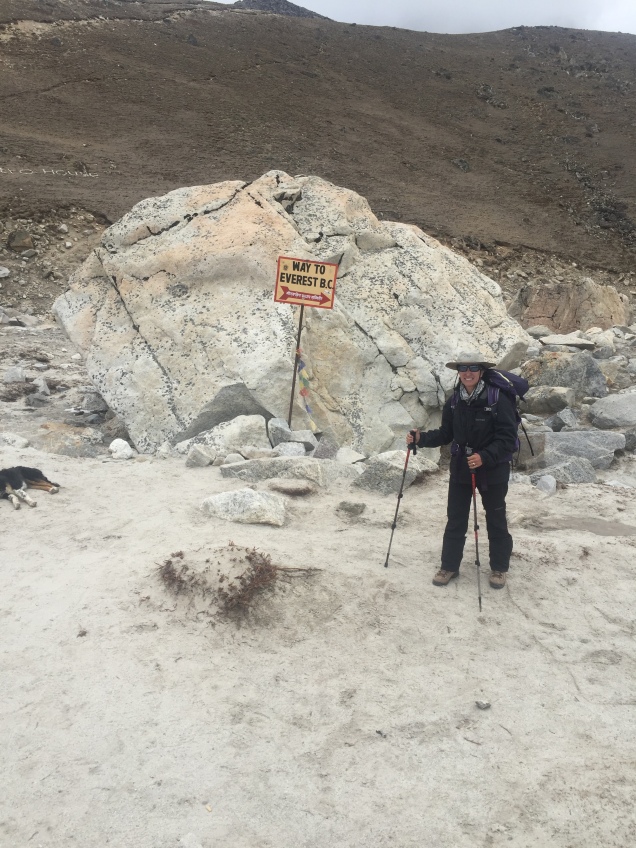 The creepiest part of the experience was to hear avalanches and rock fall by Everest and the surrounding g mountains. J and I were hiking by ourselves ahead of the team. At first I heard a sound like thunder – a slow roar, a rush, and then I heard someone yell from across the valley. I think it was on Lhotse. We heard several more similar soundtracks – and on the way back I saw a huge rock become dislodged and start a slide.

We waited for M and S at the levee just before base camp so we enter together surrounded by prayer flags. It’s very spread out and I wish we’d had the time to poke about. Weather had been terrible at the summit so most of the climbers were still at base camp.

After photos, we headed straight back. Exhausted and early to bed – especially since J and I were rising early to climb Kala Pattar – 18’200 feet – which was our main mission.

We got up at 5, had a coffee and a Cliff bar, and met up with our guide. Our tea house was very close to the beginning of the trail. Very steep dirt for the first part and my fingers were absolutely numb. The ground was frozen solid. Then, there was sort of a tundra area and another steep uphill, this time through black stone (which is what kala pattar means). A tiny bit of scrambling, especially at the top – and we were there. Surrounded by the panaramic view of the highest of the Himalayas – I finally I had that over 18,000 feet of altitude nothing will get to you feeling that happens only  at serious height and after days of trekking. I was happy. 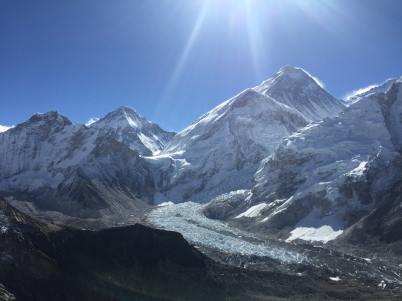 Descended, and had breakfast with M and S. We headed back to Lobuche, for lunch at the Oxygen Altitude. We were about to start the trek for the long way home. (More to come in that front.)

M and S had never done anything like this before. They did great. But it’s nothing to do with the training or  physical discomfort you endure. The outcome of trekking at high altitude takes a while to sink in.  The reality is – no one and nothing can ever take away it away from you. We had stood in the attic just under the roof of the world.