Writing from the Hacienda Rumiloma in Quito, where one of the resident peacocks has just perched outside our window. We are in a beautiful large room, filled with antiques and a bathroom with an elaborately tiled sunken tub and a view into the cloud forest. The property on which the hacienda is located has been in our guide’s family for a hundred years. It’s minutes outside of Quito – up tremendously steep hills that are lined with apartments, bodegas, small restaurants and many people, all outside enjoying a beautiful day.

The hacienda is at almost 11,000 feet and we could feel the altitude last night when we arrived after dark. The airport is about an hour from Quito – despite the pilot’s dire warnings of turbulence the descent wasn’t too bad. But it was a bit disconcerting to land looking up at the sides of the mountains.

Today we spent touring the old city of Quito. We started with the Virgin of Quito – an enormous winged Virgin Mary, who is stepping on a serpent, a gift from Spain in 1946. 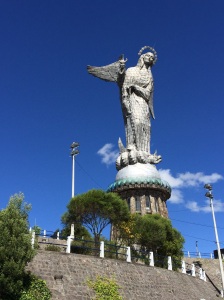 From there we wandered with our guide, Ossie, through various squares and side streets, and once mass had ended visited the gold encrusted Iglesias de la Campana de Jesus. It’s a baroque-style church, every inch of which is covered by carvings with 18 karat gilt pressed into their surface. The ornamentation is so geometric that were it not for chapels dedicated to multiple saints lining the sides you could almost be in a mosque.

We had lunch at an Ecuadorian restaurant, lots of corn, potatoes, pork, with Ossie and his charming wife and one of his teenaged daughters (who will be in Boston soon on summer science scholarship) – and enjoyed hearing their stories of a six month stay in the deep Amazon jungle.

Then it was off to the Equator line that divides the northern and southern Hemispheres. Funny how until then it never occurred to me that Ecuador is so named because of the equator.

We’ve just returned to the hotel and Ossie checked out equipment. We mostly passed. Tomorrow will be our first acclimatization climb. Instead of Gua Gua Pichincha, due to wind patterns we will be climbing Rucu Pichincha (means shiny). It’s about 15,696 feet high and should be a six hour round trip.

So the climbs are about to begin. Right now they are filming a movie or doing some sort of photo shoot outside my window. There’s a yellow VW bus, sunflowers on the dashboard, decorated with “just married” regalia. A bride and groom are sitting atop the van. Not sure what it all signifies, but it has to be a good omen!